Monday was a very bad day. Tuesday morning started out kinda the same. Remnants of the crappy yesterday had stuck around. I hadn’t been this angry about something in a while.

My response to crisis is usually food. Food is comfort. That can lead to mindless eating. But, sometimes it leads to a really good breakfast that makes for a better start to the day.

I had cereal for lunch with zero plans for dinner. But, at least breakfast was good.

I started it simply, with chopped bell pepper and some minced cayenne pepper from the garden. I don’t know why they didn’t turn red. But, the seed pack said cayenne, so that’s what they are.

You could add a million other things in there too. Leftover potatoes, chopped onions, broccoli, leftovers from last night’s dinner… pretty much any veggies you think would be great probably will be.

After the peppers cooked in some oil for a few minutes I added some beans. I had pinto on hand. Yum. Black beans would also be great. And if all you have are kidney, or cannellini, use them! Why not?!

After the beans got hot, I added some whisked eggs. To keep it vegan, add in some crumbled tofu. Easy.

I took a pic of the tortilla being topped. It looked not amazing. The eggs had turned a bit grey from being cooked with everything else. If you want them to look amazing and yellow, scramble them separately. And then wash that extra dish. Yeah. No thank you. Less dishes is always the best option.

I laid out the tortillas, topped them with a handful of cheese, then the bean mixture. I used a mixture of cheddar and monterey jack, but if you’re going vegan, my favorite is Violife (just like cheddar or just like mozzarella shreds are great!). They got rolled up and then, the best part. A clean skillet with hot oil, cook that burrito on all sides until it’s shatteringly crisp. Yes please!

For topping or dipping, I like avocado with a bit of salt, and some sour cream. Tim likes salsa. Some people might like cilantro or some diced tomatoes.

However you serve them, they’re pretty quick and easy and make for a great start to the day.

Kale and Farro Salad with Bacon

I have eighteen kale plants in my garden. That’s a lot for a family where only one of us likes kale. I’ve got everything from huge three foot wide plants, to a couple that I transplanted later in the season that are still pretty small. It was definitely the most successful thing I planted this summer.

I have plenty of uses for kale on here. Some of my favorites are: Massaged Kale and Tuna Salad, Hearty Kale and White Bean Quesadillas, and turning it into pesto to go alongside Spicy Twice Baked Sweet Potatoes. I prefer it when it’s smaller, tender, baby kale. Tim, I believe, prefers it when it’s not served at all.

Today, I’m craving bacon, but feel a bit guilty about how much kale I have grown and not eaten. So, I’m gonna use them together. They’ll go alongside farro and some apples from our tree to make a quick lunch.

The dog is reverse hiccuping. Anyone else have a dog that does this? It freaks me out, even though our vet says it’s not dangerous.

I got advice for farro cooking from Bon Appètit. Their technique treats it like pasta. I can do that. I started with six cups of water, added a good amount of salt, and brought it to a boil. I toasted the farro in a dry skillet while the water heated. It ended up taking five minutes. Oh, and I rinsed the farro, before I toasted it (just gonna work backwards for a sec). I’m not sure if I was supposed to. But, I think that’s a thing with other grains, so I did it. I’m quite the authority on food.

I may not know a lot about farro, but when it comes to bacon, I know what I like: Mazzeo’s Danish bacon, cut pretty thick. Prefect for BLTs or cutting into lardons, like I did today. I totally didn’t cook enough though. I made two slices. I should have done six. What even was I thinking?!

I cooked the bacon and left about a tablespoon of the grease for the kale. I know that kale will wilt down considerably, but still I second guess myself when I add the whole salad spinner’s worth of kale to the pan. It will work. Right?!

Here’s what I like about this salad: the kale is bitter. Wait, I don’t like that. But, bitter kale, when accompanied by sweet apples, nutty farro, and salty, crispy bacon, mellows. And then I do like it.

If I’m honest, I mostly just want to eat the bacon. But, the rest of it is pretty good too. Ok, really good.

Top it all with Sir Kensington’s Golden Citrus Vinaigrette and, well, you’re golden… (are puns still allowed?). If you can get your hands on Sir Kensington’s products, I’d strongly recommend them. If you can’t, I’d whisk together some lemon juice, balsamic vinegar, and extra virgin olive oil. I’d add a splash of maple syrup, a plomp of dijon mustard, and a pinch of salt. That’s my go-to dressing and I think it would taste great here too.

Sometimes after I eat a meal like this I feel so healthy that it makes me want to eat a huge pizza. You know, for balance.

Kale and Farro Salad with Bacon

It’s been a long time since I’ve been in this space. I’ve missed it. I’ve been dying to be back.

A month ago, I made the decision to make the best of a situation that was beyond my control. It allowed for some time to be spent working from home. It seemed like the perfect opportunity to start doing the cooking show again. So, I’m gonna try. The format is similar, just set in a different kitchen, in a different state (did you know we moved across the country?).

This episode is a better than takeout Udon and Spicy Pork. It’s easy. So easy. The featured ingredients are red cabbage, scallions, udon noodles, and ground pork. Umm, that’s actually most of the ingredient list. I mentioned that it’s simple, right? Yeah. I wasn’t joking.

I cooked the pork. Easy. I added cabbage. Delicious. I found some scallions that had survived the winter and tossed those in too. Then the sauce is a quick whisk together of tamari, Sriracha, Hoppy Valley Sweet and Hot Pepper Jelly, and rice vinegar. I whisked it with cornstarch and cold water, then added it to the cabbage and pork. That’s it. Dinner without having to wait for delivery.

It wasn’t as spicy as I wanted it to be. So next time I’m adding a whole teaspoon of Sriracha and more of the hot pepper jelly. For my vegan pals, I think you could substitute immature jackfruit (drained from the brine that it’s packed in) or crumbled tofu in place of the pork. For my gluten-free friends, rice noodles would be perfect. Make it however you want. You do you.

I can’t figure out how to add the recipe plugin that I used to use. It’s been one thousand years since I’ve done this. So for now, just take a screen shot and print out the recipe. Do people still print recipes? I don’t know. I’m going to have a glass of wine and watch Schitt’s Creek.

Chicken Pot Pie – In the Kitchen with Rachel O – Video 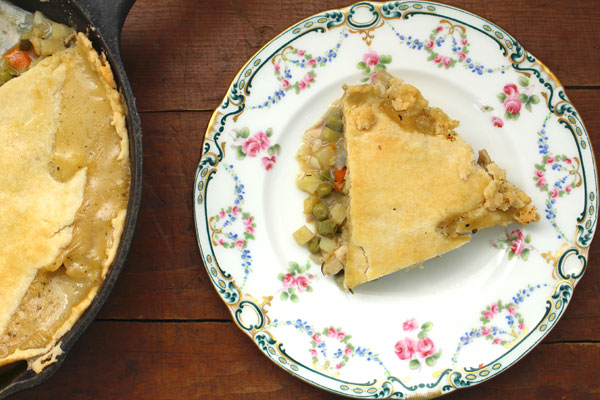 I would, I could, I will eat it any time of year. But, I especially love to eat cozy foods when the weather co-operates. 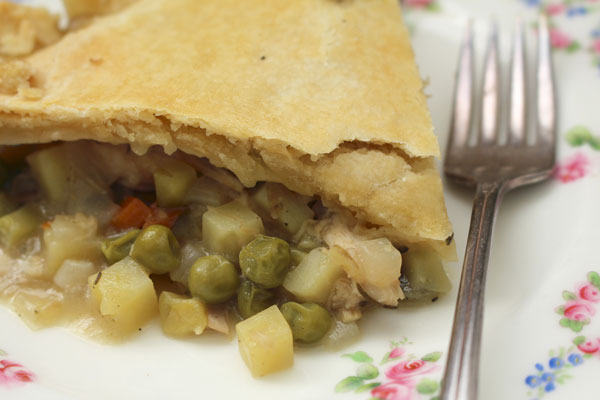 Chicken Pot Pie is one of my favorites. That might be why I have made it twice, once on each show. 😉 You can see the original here.

I don’t know if I’ve ever not liked it. I mean, can you really go wrong with a flaky crust (I used AimÃƒ©e’s recipe this time, yum!), sautÃƒ©ed veggies, and a creamy sauce?! You are shaking your head no too, right? 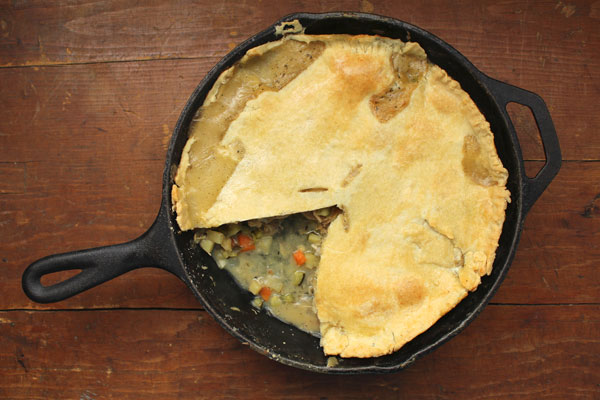 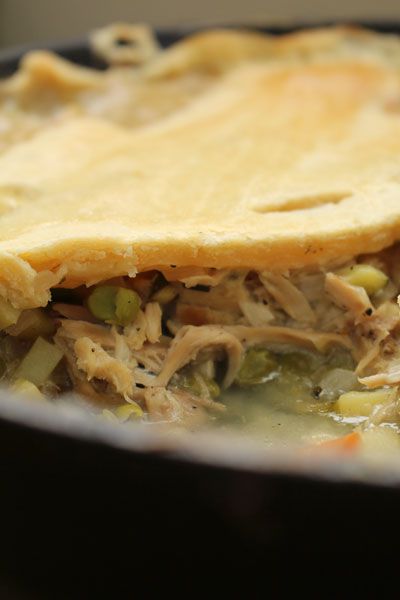 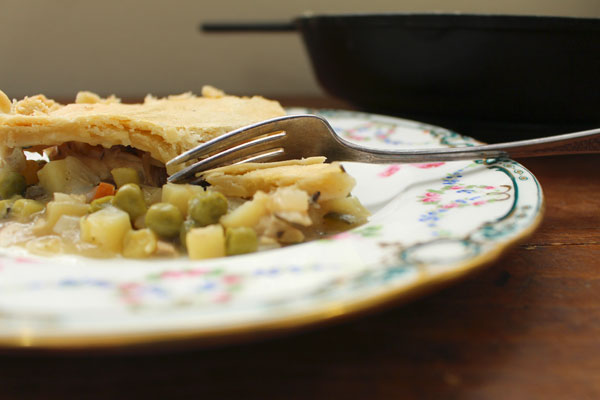 I would almost be happy just to look at it. Even the one I made for the most recent show, as ugly as I made it (I had some trouble crimping the crust… I think I need more practice), still looked amazing. But, then you cut into it… Steam pours out and you get a whiff. Oh that filling… And you know that you have to eat it right away. Something this good just can’t be made to wait. 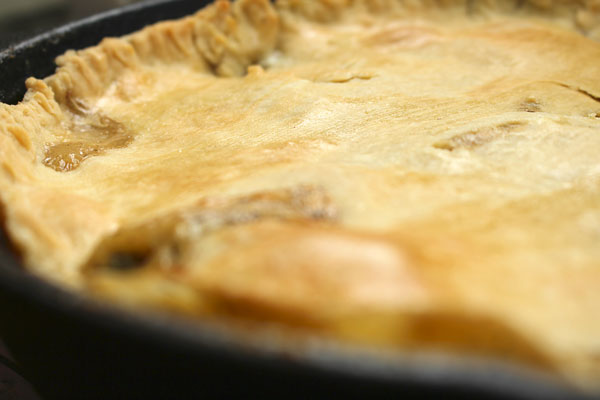 Written by Rachel, Posted in Drinks

The quantities are not exact. I basically just take some mint and pour boiling water over it. If you like it strong, use more, for weaker tea, use less.
I don’t usually sweeten, but you could if you wanted, with honey or sugar. Just dissolve it when the water is still hot.
This tastes great with burgers and oven roasted fries. Mom used to make this all the time in the summer (without sweetening it). It tastes like my childhood.