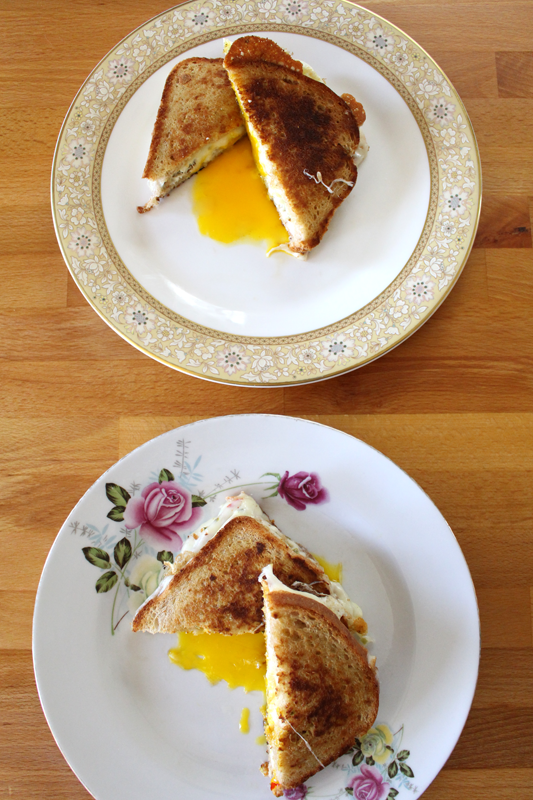 It’s important to me for us to eat well balanced, healthy meals. I usually have our menu planned in advance, but some weeks things just don’t seem to come together the way I’d hoped they would. Other weeks they do. But, no matter the week, the outlook is always a little better if I have a few staples on hand. Some, like eggs, are just good to have around. There’s always something to eat when we’ve got eggs. Eggs + lentils + sweet potatoes = lunch. An egg over pasta = dinner. Eggs poached in some leftover soup = a quick, easy, comforting meal.

For this we have eggs.

Some other staples that I always try to have on hand are: cheese, milk, bread, yogurt, nut butter, nuts, and chips and salsa. With these ingredients I find it much less intimidating to plan a menu, or just a quick meal when what’s meant to be made isn’t happening. 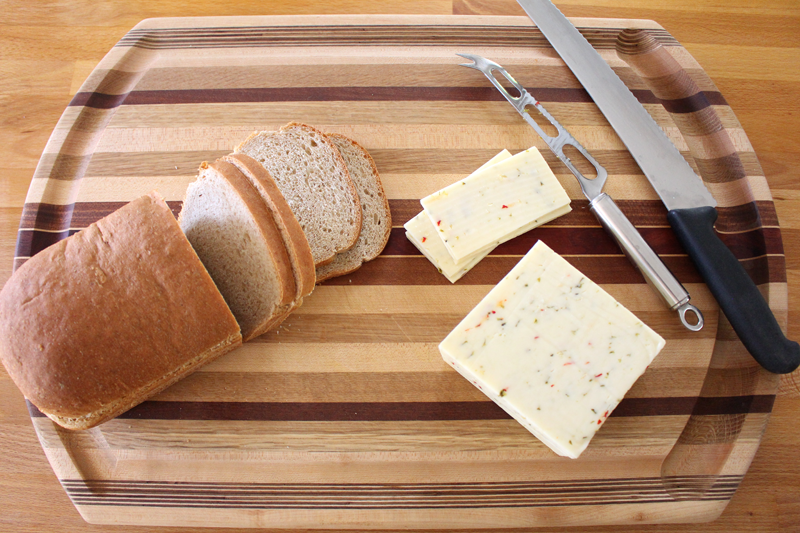 Grilled cheese has been a favorite of mine for as long as I can remember. Grilled Cheese and Tomato Soup remind me of rainy days growing up, and are one of my all-time favorite comfort foods. Now, as a grown up, grilled cheese and any kind of soup is on the menu often, especially at this time of year. It’s quick and easy, which is perfect for this busy season. 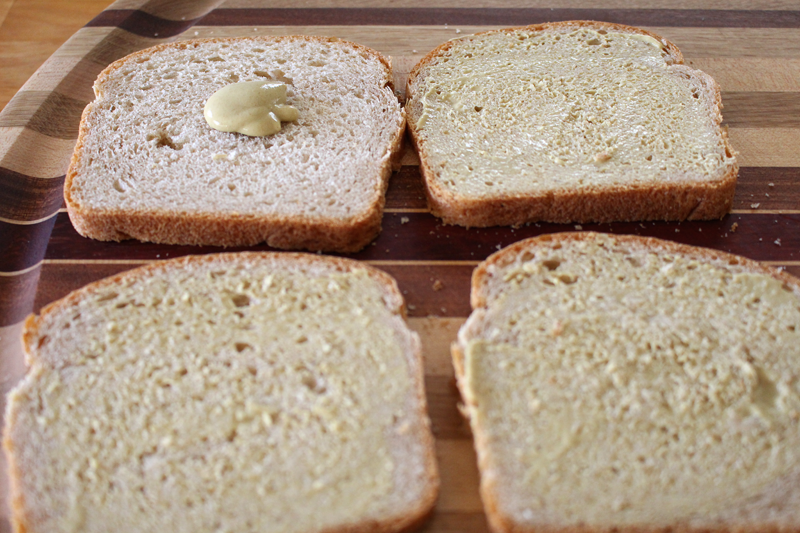 I do most of the cooking in our home. I like it like that. But, every once in a while Tim comes up with something and I just kinda shake my head in amazement. There’s not much that he’s not good at. Cooking included. One evening, after he’d worked late, he came home and made himself a grilled cheese. I’d already eaten dinner, so I said that I didn’t need one. I regretted that decision later. He’d put mustard and butter on the outside, and added sliced pickles to the inside. It was delightful. So for this recipe, I took a page out of his book and added mustard to the olive oil that I like to spread on the bread. The mustard goes down first, oil second, so the oil will kinda protect the mustard from burning. 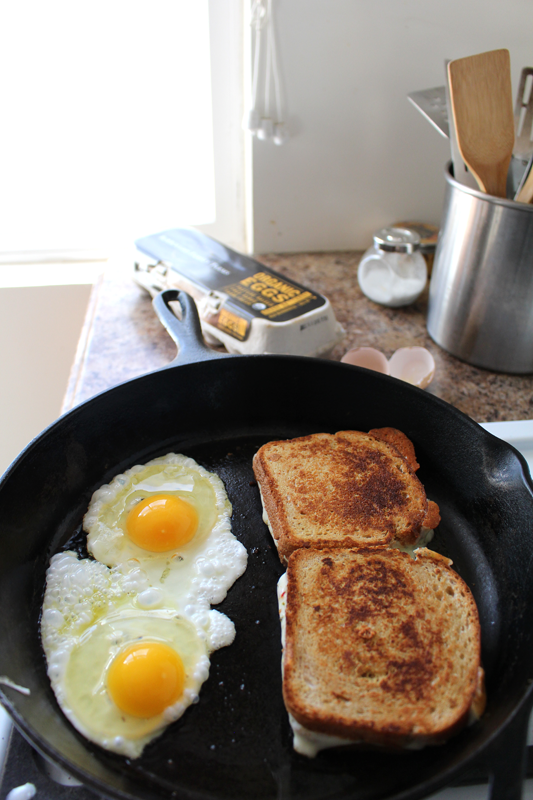 Once the sandwiches are mostly cooked, I like to scooch them over to one side, and slide the empty side of the skillet over the flame and add a little more olive oil and some eggs. For me, a well seasoned cast iron skillet works best here. I like to turn the heat up a bit so the edges of the eggs get a bit crispy in the olive oil. I like my eggs over medium (runny yolk, set whites) and the high heat helps me to accomplish this. I flip the eggs carefully, turn off the heat, and let them sit for a few seconds for the whites to finish. 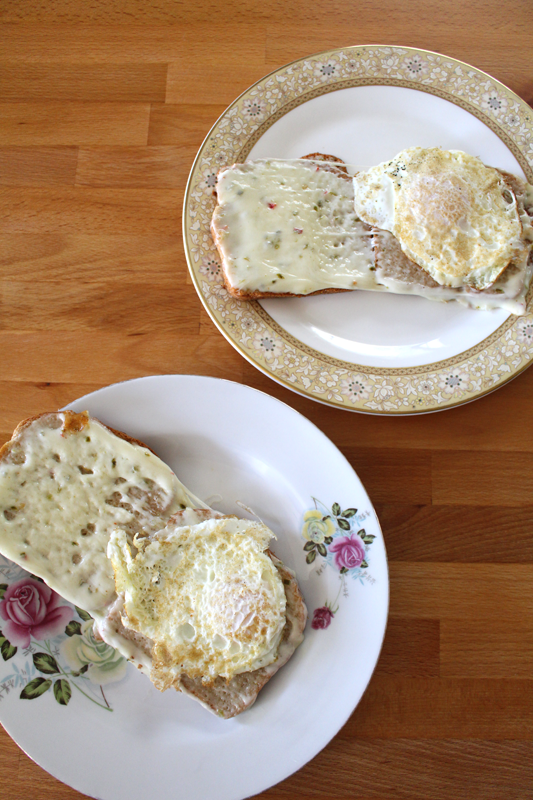 During the summer when tomatoes are in season I’d probably add a few slices, and maybe some lettuce and homemade mayo. Right now, just an egg will do. 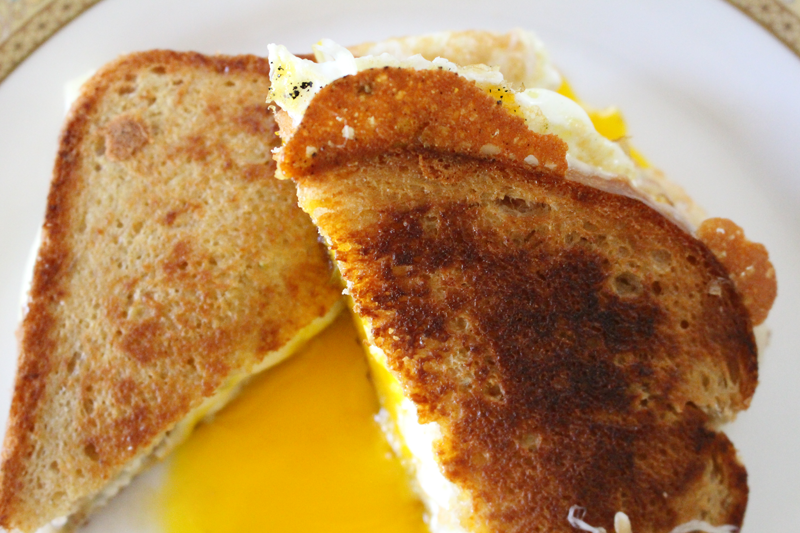 If the yolks are still runny, I love to sop ’em up with the sandwich… Making sure to have a napkin on hand, as these tend to get a bit messy. 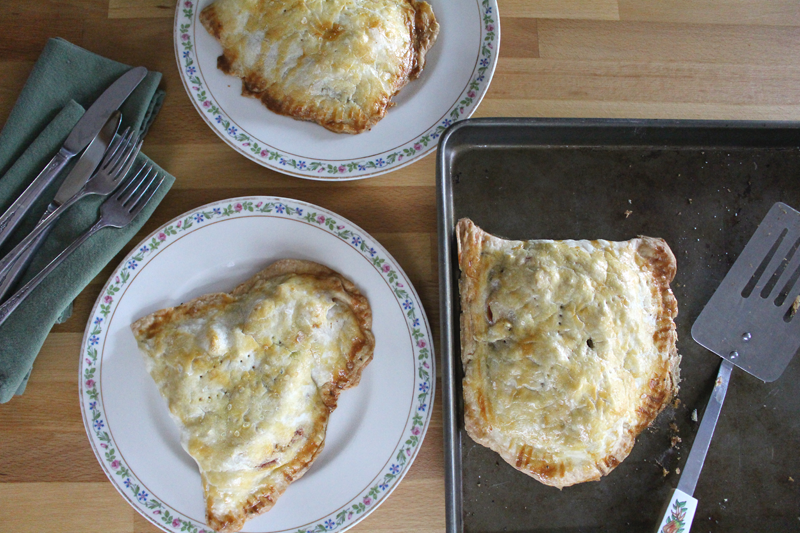 My friend Christy came over for lunch the other day. She’s one of my favorite people to eat with and I often think of her when I’m cooking, since our tastes are so similar. She asked where the inspiration for this dish came from. I can’t honestly remember. It may be the heat (still up close to 100 degrees F, which is obviously wrong for September), or just a leaky memory. Wherever the idea came from, it was good. 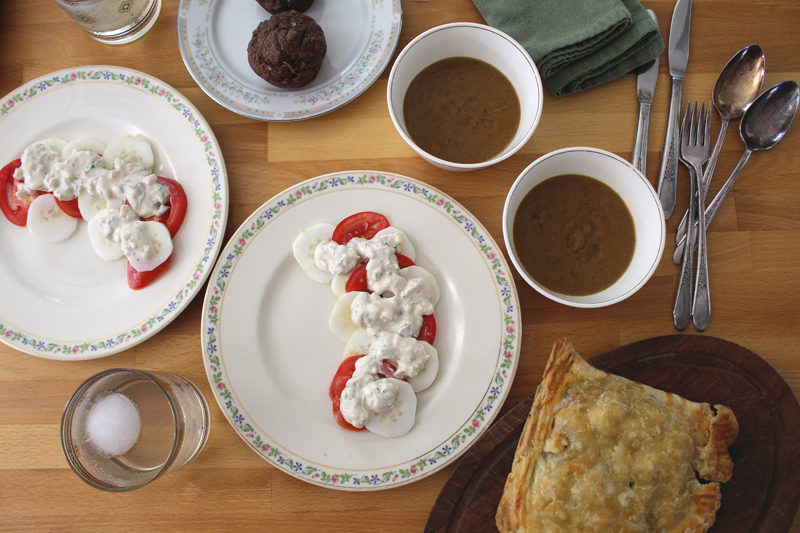 It went well with the Creamy Cucumber and Tomato Salad that I’d made (more on that another week), the Roasted Eggplant Soup that she’d brought, and the Lemon-Basil Spritzers that we were drinking to beat the heat. I mean, mostly, we were just happy to be hanging out. But, it’s always even better when there’s yummy food to compliment a wonderful friendship. 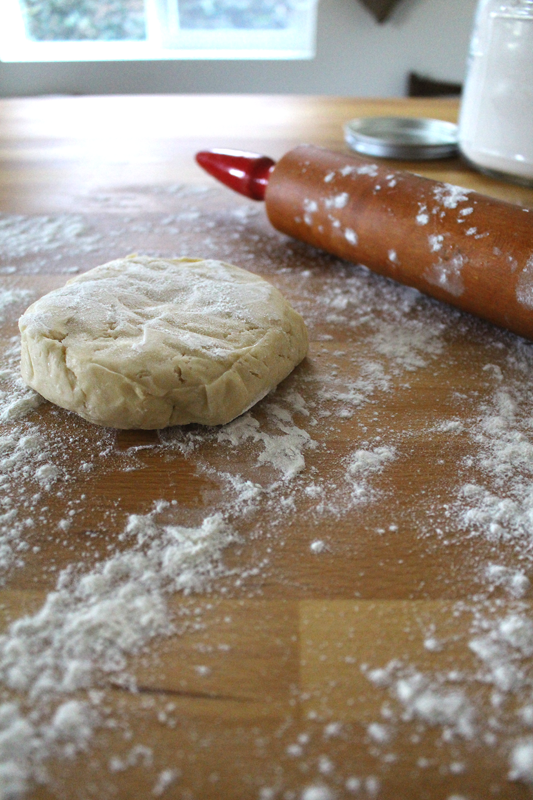 It all started with what I call Fish Wellingtons. And they all started with a good pie crust. I use Alana Chernila’s recipe. (Page 149 of her cookbook, Homemade Pantry.) It’s the best pie crust I’ve ever made. I gave Christy this cookbook as a birthday gift during lunch. I’m not sure who was happier that she has it now, her or me.

I’d made the crust the day before and frozen it. It’s also great made the day of.

Frozen pie crust is a great stress/tension reliever. Have you ever had the opportunity to smack a partially frozen pie crust with a rolling pin? As effective as a punching bag, and, you can eat it later.

I’ve used two kinds of fish for this dish. Swordfish and Halibut. Use what you like and what you’d think will go well with the rest of the ingredients. I liked both of these, and would use either again (especially if they’re on sale, which is why I used Halibut this time, Swordfish last time). 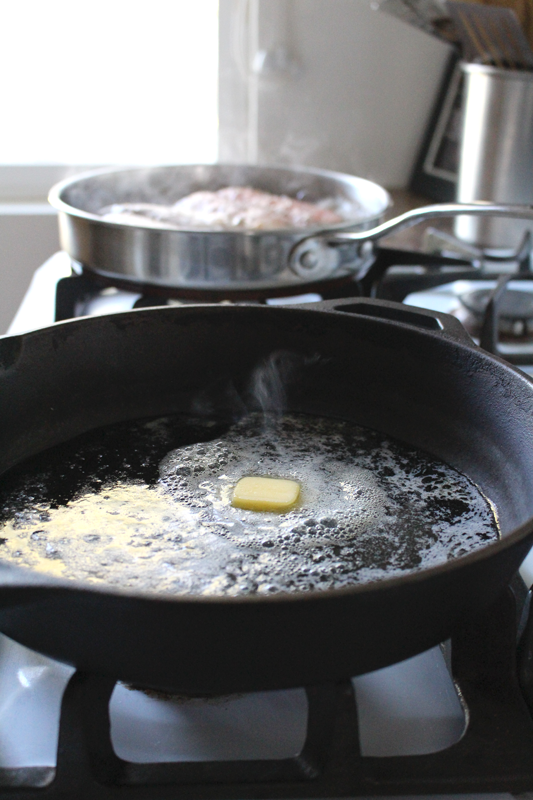 Sometimes I like to stand by the stove and listen to the food cook. I often forget to slow down and listen. There’s so much beauty to be found in simple things like liquid bubbling in a pan. Things like this refresh me. 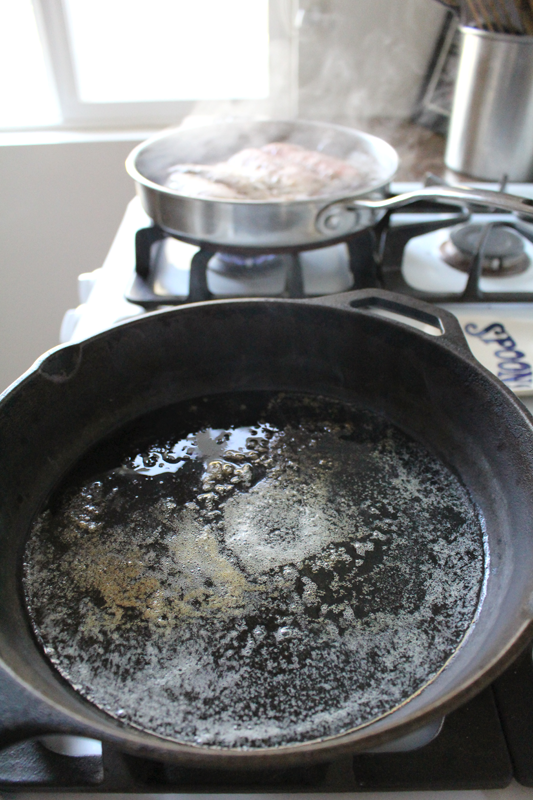 You don’t have to use butter. But, I love the deep flavor that it adds. If you’d prefer, olive oil would be great too.

You also don’t have to brown the butter, if that makes you nervous. But, you’ll be missing out on the even deeper, richer flavor that browning it brings. 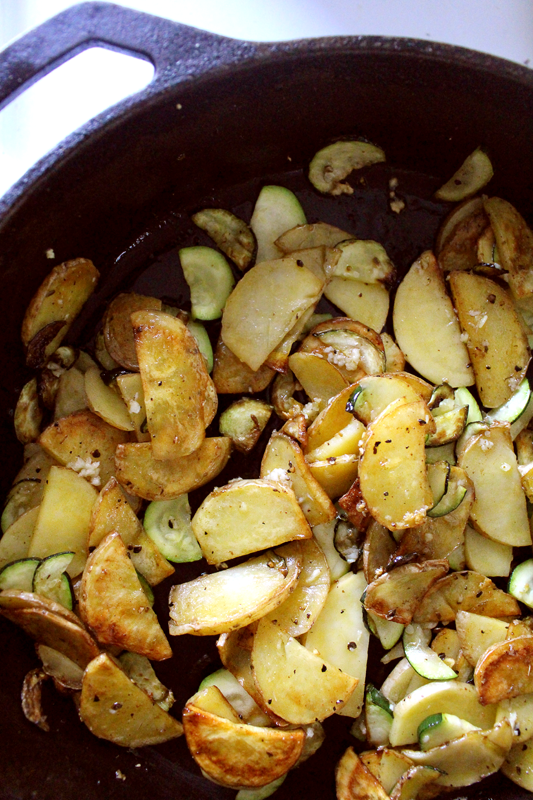 The potatoes and zucchini are thinly sliced and crisped up in a skillet. When they’re done, garlic is added, mostly to make you swoon from the insanely awesome smell. 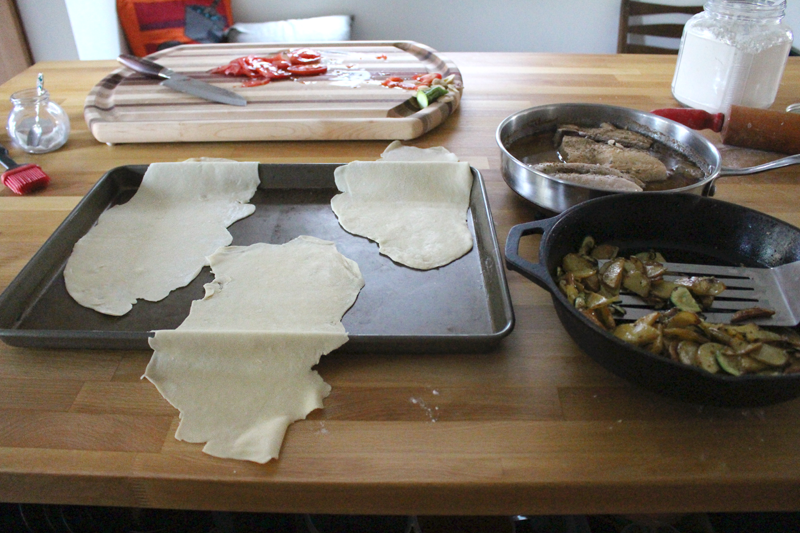 Crusts are smacked and rolled out. They’re topped with all the goodies you’ve been smelling (and sampling – the potato filling might not all fit – don’t be afraid to stand at the island and eat the leftovers – saves a container from having to be washed at a later date). 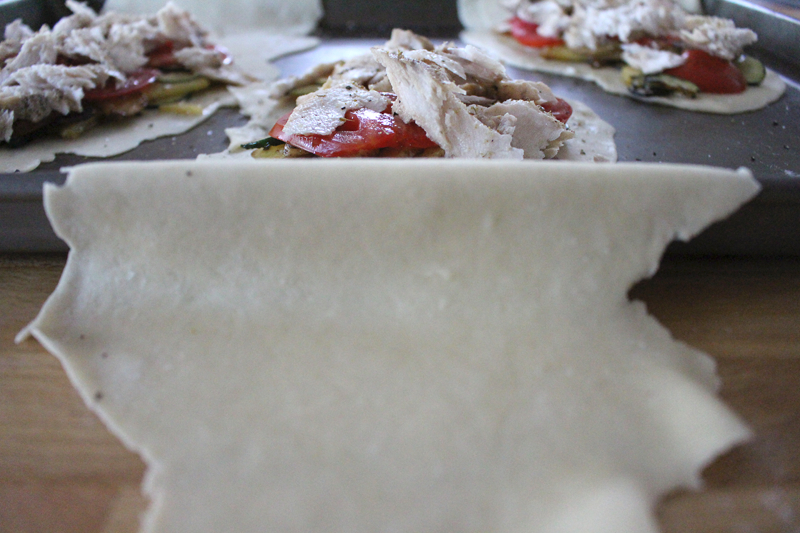 Fish is broken apart and added. You probably won’t need it all – leftovers can be frozen and saved for Chowders or refrigerated for sandwiches and salads. 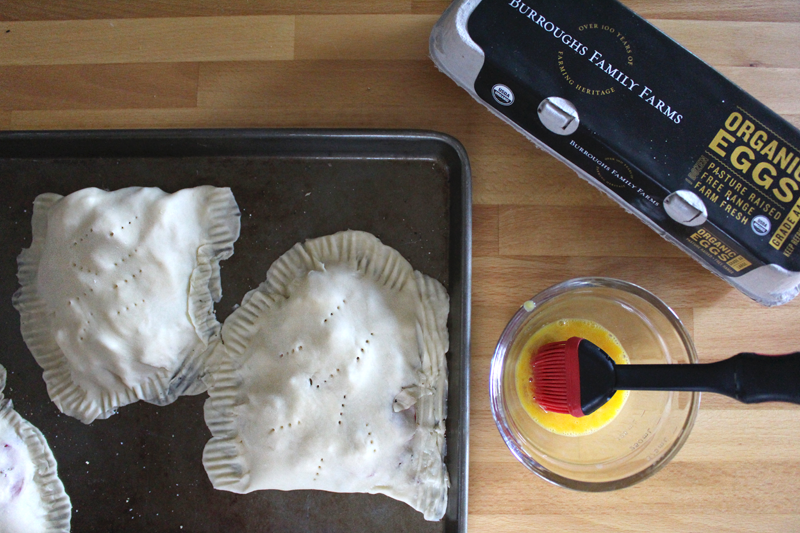 The crust is folded over, crimped shut with a fork, poked a bit, then brushed with a beaten egg (save the rest of the egg to add to scrambled eggs or an omelette). 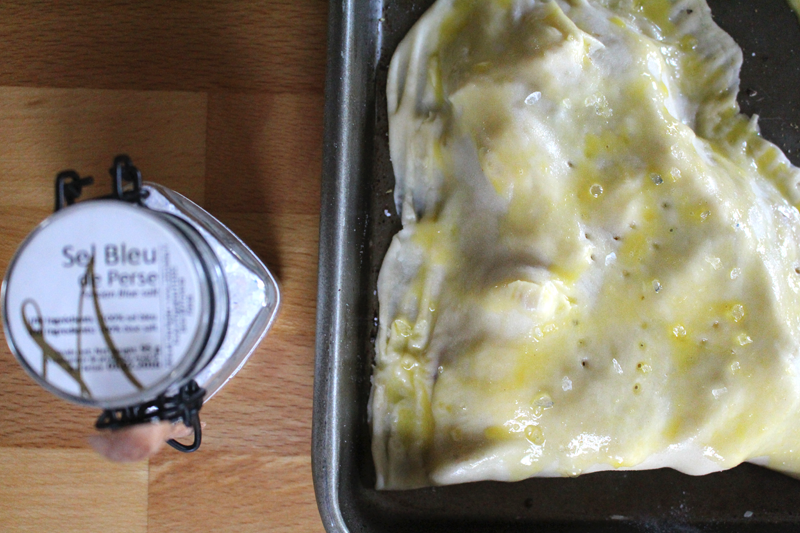 Then, the best part (according to Tim): sprinkle each one with some coarse sea salt (preferably some that you brought back from Paris when you were there almost a year ago…). It adds a great crunch. 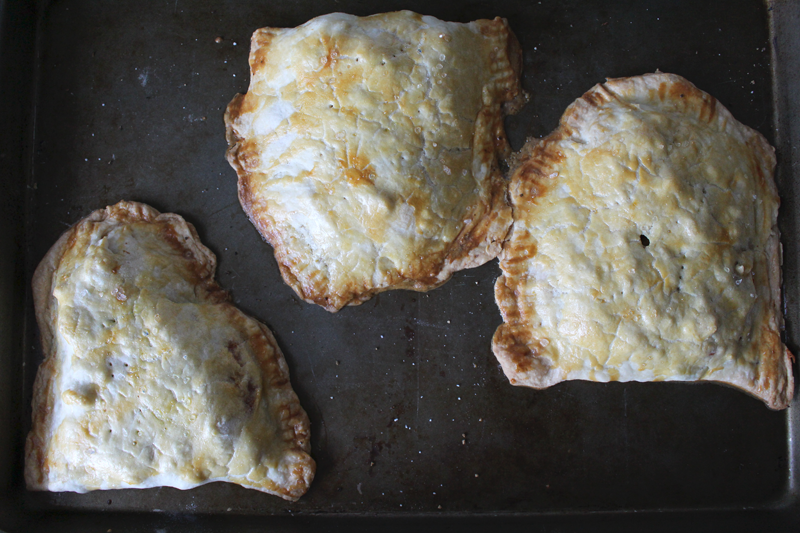 I’m wishing that I’d made six instead of three. I think I could eat this everyday for like ever… But, then I say that about most things. 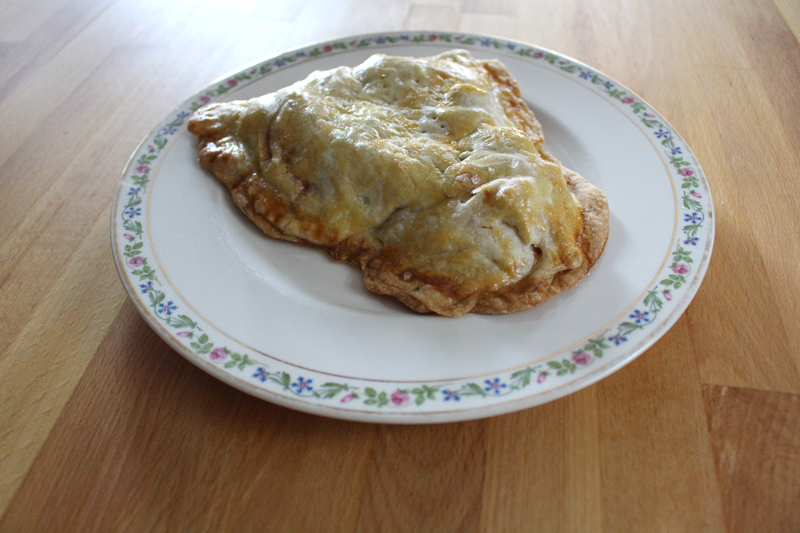 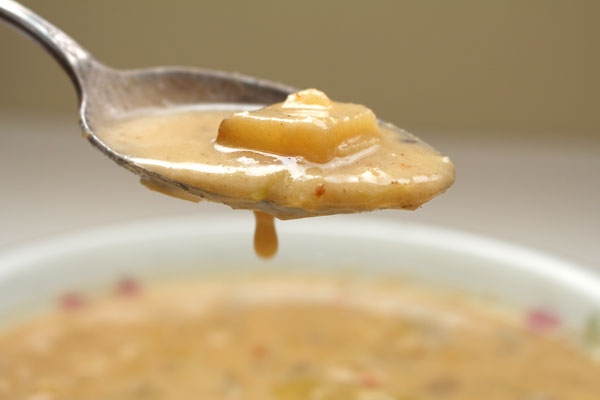 I’m all about soups at this time of year. I’m sorry if you aren’t. Buuut also… I’m kinda not, because I think they’re so good.

I just can’t help myself. 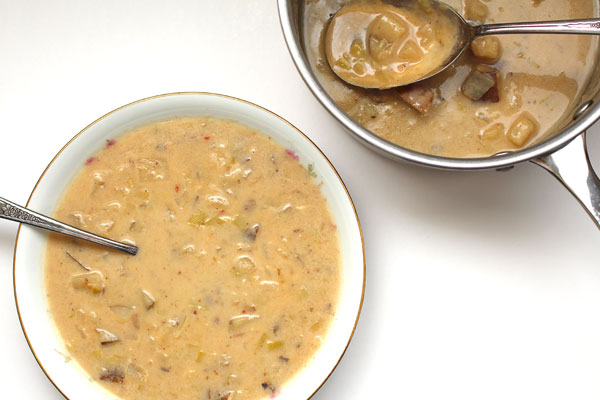 Leek and Potato Soup would be great as a main dish, but I think it would also be delicious as an appetizer. I could see it going well with a dinner where ham is served, maybe a Spinach Salad, and some Steamed Carrots with Butter and Honey. Oooh, that’d be good. 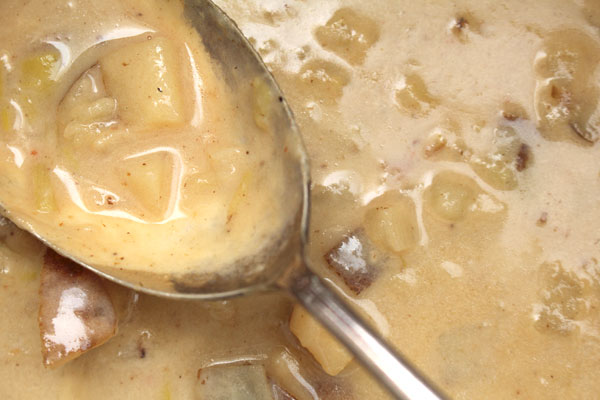 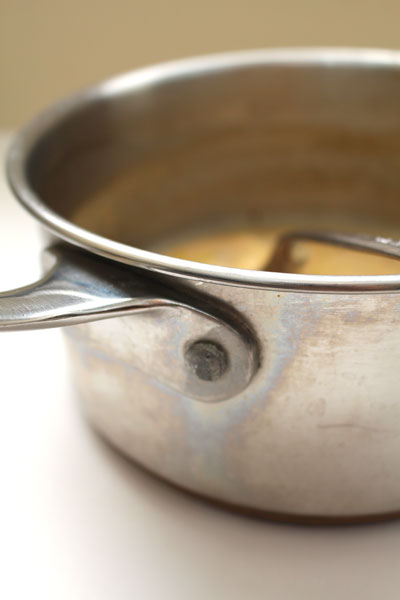 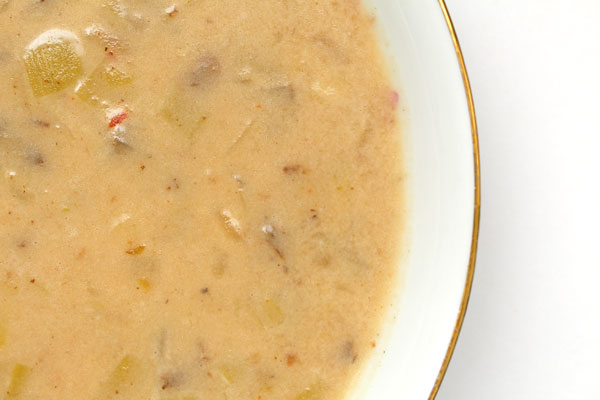 Maybe you prefer it as a lunch dish. Cool. I like soup and grilled cheese for lunch on a cold day… Ok, I like that meal at any time of day, any time of the year. But, there’s something so comforting about soup and a sandwich. Having grown up in Southwestern Ontario where it gets for real cold, I have memories of snow outside, snow pants, snow forts, and coming in the house to a hot meal that Mom had prepared. I love that feeling. It’s one of the things that I miss about true fall and winter weather. Maybe I wouldn’t feel the same if I lived in it again… I don’t know. You know how the grass is often greener where you are not? Yeah. I wonder. Maybe someday…

For now, we will bundle up in our spring jackets, unlined boots, and thin scarves, and count the blessings we do have. Nice weather most months of the year definitely has its perks. 😉

This was one of those days when lunchtime was inspired. Usually, I make the quickest and easiest something or other‚ that I can eat at my desk. Often it’s PB&J, or almonds, fruit, and cheese. But today was different. I don’t really know why.

Whatever the reason, I thought of the head of butter lettuce (which I do believe is my new favorite kind of lettuce) that was waiting in the produce drawer. I hate it when I wait too long to use lettuce and it goes bad. That’s a sad sad fate.

Then all sorts of yummy toppings popped into my head. 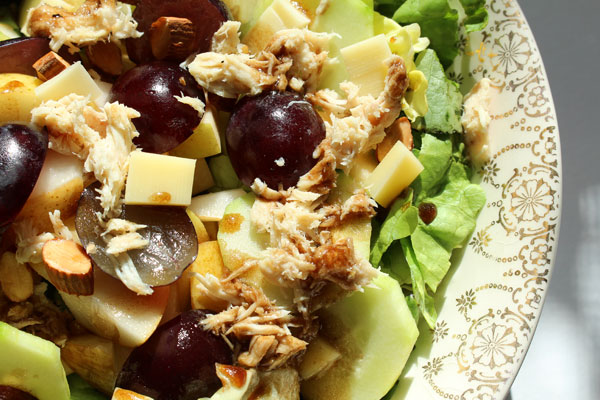 Tuna for protein. And almonds too, for the protein and the crunch. Chopped, so it seems like there are more.

Super ripe pears that just made it into the fridge yesterday, because I’d forgotten that they were hiding in a bowl. An apple. I ordered 10 pounds of apples two weeks in a row. It’s taking a while to get through them. I don’t mind.

I’m totally in love with peony grapes. I’m not crazy about how awkward it is to get the seeds out, so I halved them and scraped them out before tossing them into the salad.

We have a couple cucumbers in the fridge that need to be eaten. Cucumber is a nice accompaniment to tuna. Also adds a nice crunch. I love a good crunchy salad.

I like a few small chunks of cheese in anything. Today I chose gruyère, because that’s what I had on hand. It’s my current best cheese. I have to cut just one or two slices when I eat it, or I can easily eat half the brick.

For the dressing, I made a simple vinaigrette, my go-to recipe. It has balsamic vinegar, olive oil, salt, pepper, dijon, and maple syrup.

Combining all of this was a good idea. I wasn’t sure how the fruit would go with the tuna. But, I loved it. There’s all sorts of sweet, savory, salty, acidic flavors going on. At one moment deep mellow, the next light and fruity. Oh, and it’s healthy. I love that healthy tastes great. No cardboard-like food for moi! And, bonus, there’s lots of tuna and dressing leftover, so it will be perfect for making a tuna sandwich for tomorrow’s lunch, and maybe another salad the following day.

This would go well with the Leek and Potato Soup that I made for dinner yesterday. I wanted to have some, but was just too hungry to wait for it to heat up. Maybe next time. 🙂