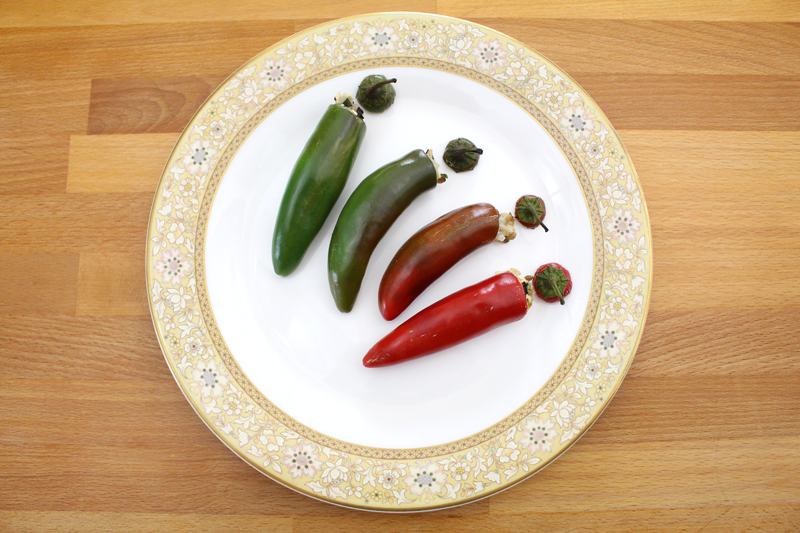 I’ve seen different varieties of pepper poppers before, but never actually tried to make them. They’re often filled with cheese. Yum! But, I wondered if maybe they could be filled with something a little more nutrient dense. Cheese, I’m down with, but let’s add a little more. 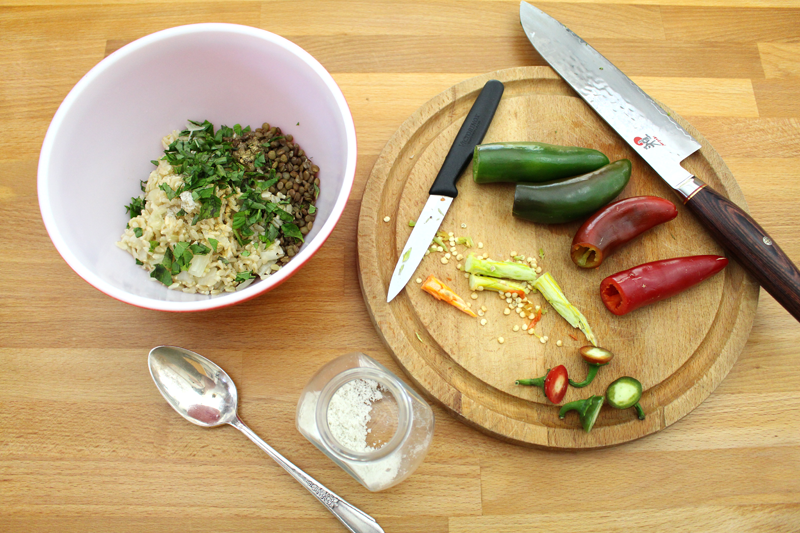 I opted for green lentils, which I’m totally digging right now, and brown rice.  Along with mint and basil for a cool and fresh taste.

I used jalapeños this time. And to be honest, for me, they were too spicy. But, I used what I had on hand (and then drank a big glass of milk after I ate a whole one and my mouth burned up). Next time, I’d opt for a much milder pepper.

The tricky thing about these is since the pepper is staying almost whole, it’s hard to be sure that all the ribs and seeds are gone. I mean, I did the best I could, but there might have been more heat left in there then if I’d halved it and taken the ribs and seeds out that way.

On the Scoville scale, Chipotle, Fresno peppers, jalapeños, and wax peppers (like the Hungarian wax pepper) are rated at 3,500-10,000 Scoville Heat Units. Milder peppers are: Jalapeños (yes, they appear in two categories), Anaheim peppers, and poblano peppers (or ancho), at 1,000-4,000 SHU. And milder still: banana peppers, peperoncini, and pimentos come in at 100-900. Bell peppers are rated at a 0. The spectrum ranges from a pepper called the Carolina reaper at 2,200,000 SHU to the banana, paprika, Cubanelle, peperoncini, and pimento peppers are 100-900 SHU. (1) That’s a big range.

I use jalapeños all the time, buuuuut I don’t usually (ever) eat a whole one… in one sitting… in a three minute time period. They’re usually diced and added to dips, or Succotash, or Tacos. The heat is dispersed.

Next time I’d probably choose an Anaheim pepper or something even milder. A bell pepper would be nice. Or if you’ve got more tomatoes than you know what to do with, stuff those. 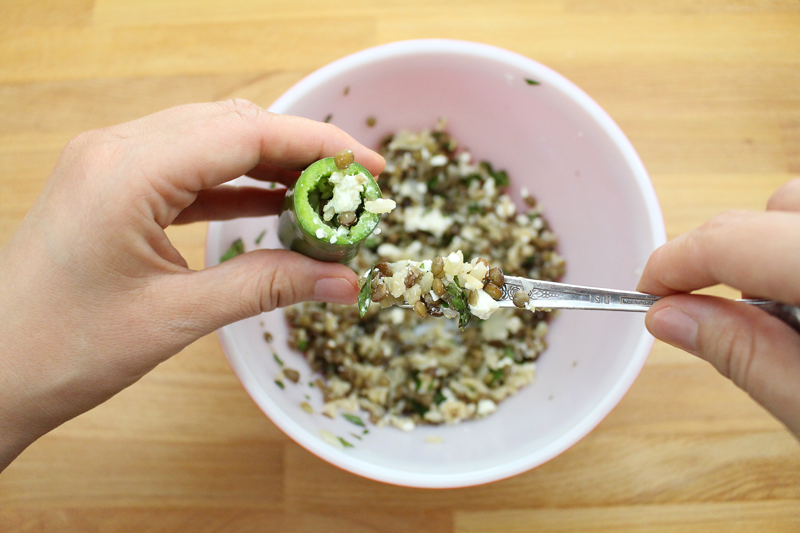 I’m usually ok on my own for these posts. I’ve figured out how to photograph with one hand, while the other works. But today I needed both hands, and I needed a picture of it from above. I did consider trying to hold the camera with my chin and shoulder. I thought better of it and asked Tim, who now does freelance work from home too, for help instead. (Don’t tell him what I was thinking of doing, m’kay? 😉 ) 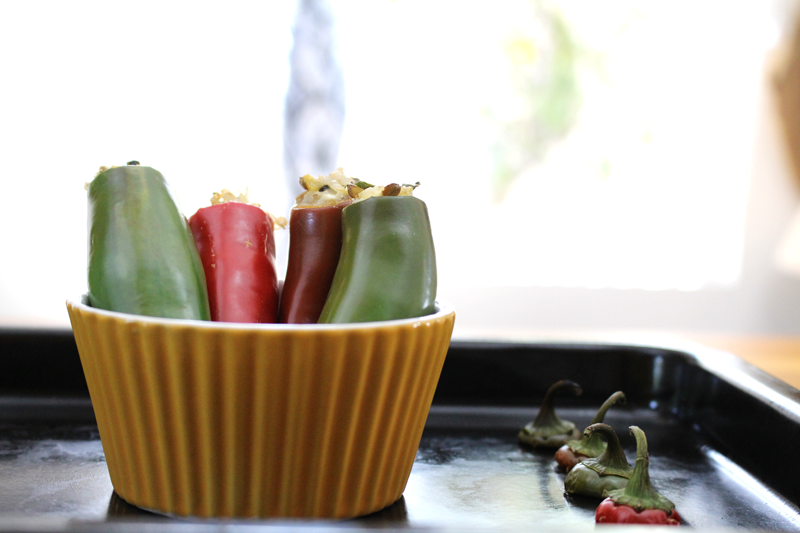 Once I settled on trying to shove the filling in with the handle of a spoon (after a few failed attempts with other utensils), I got the poppers roasting. I opted for the toaster oven, since it’s one bazillion degrees out right now. And my toaster oven opted to crap out on me, resulting in partially roasted pepper poppers. But, they were done enough, they were hot and bubbly, just not quite as soft as I would have liked (hence the 30-60 minute suggestion in the recipe – that way you can have ’em how you want ’em). 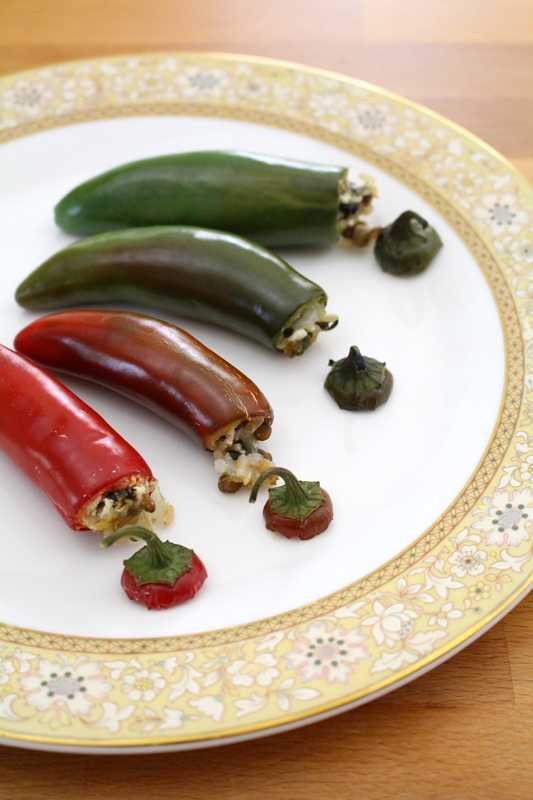 With the right pepper for you, these are a nice little treat. Appetizer, lunch, side at dinner… There was a lot more filling than I ended up needing. But, I chopped up the leftover peppers, with filling, and added them to some green beans and summer squash that were sautéeing in olive oil. The filling got a little crispy (which makes me happy), the chopped up peppers added just a kick of heat, the lentils were there for protein, the rice to get in some grains. Oh and then I topped it with a fried egg. So, I’d make all the filling, if you’re ok with leftovers*. You can pop it in the freezer if you’re not going to eat it in a few days. Winner winner we just made tomorrow’s dinner. 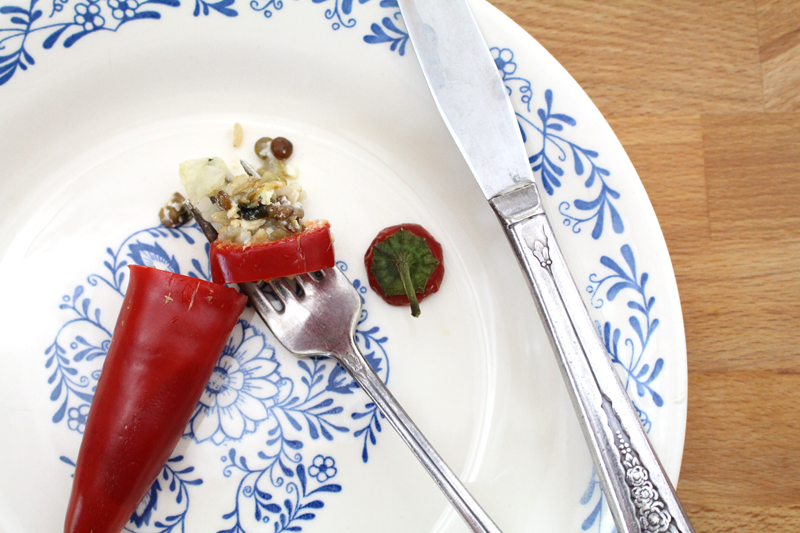 Filling may yield more than needed. Leftovers are great reheated in a skillet with some olive oil, veggies, and topped with a fried egg or piece of crispy tofu. *Use peppers as hot as you would like. On the Scoville scale, Chipotle, Fresno peppers, jalapeños, and wax peppers (like Hungarian wax pepper) are rated at 3,500-10,000 Scoville Heat Units. Milder peppers are: Jalapeños, Anaheim peppers, poblano (or ancho), at 1,000-4,000 SHU. And milder still: banana peppers, peperoncini, and pimentos come in at 100-900. Bell peppers are rated at a 0.

*To cool leftover rice, here’s what I like to do: Let it cool on the counter for a bit, then put it in the fridge, stirring every once in a while, keeping it fluffy (and not too packed into the container so it will cool properly).

« Eggplant and Summer Squash Tacos
How to Go Vegan »