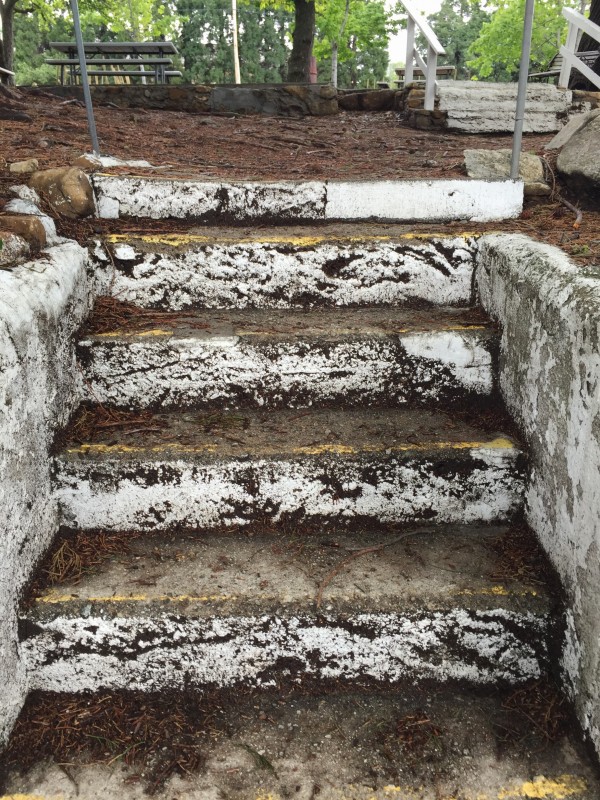 It has been a year of changes. I’m not ready to say that they’ve all been for the better. Not yet. But, I have hope that they will someday represent a time of growth and even encouragement.

Change can be confusing. I’ve felt lost through a lot of it. I’d thought one thing for so long, only to discover that it’s not a possibility anymore. Maybe it never was. Maybe it is, but looks different than I thought it would. It changes a person. It’s changed me… Is changing me.

Food, something that I’ve loved for so long, became more of a necessity than a joy for a while. It was thrown together instead of lovingly created. I get why people eat boxed meals and fast food. I was tired at the end of the day. I wanted to eat and relax a bit before going to sleep so I could do it all over again. It brought me a greater understanding of regular folks. It was a luxury, the way I got to cook before. I had a good thing going. I won’t pretend to understand why it ended. I still harbor a bit of frustration and bitterness about that. But there have been lessons learned and maybe someday the bitter will become sweet.

That was one thing that changed.

The rest, either I don’t need to go into detail about, or I’m not ready to. At least not on here. Since it’s been like six months since I last posted, I’m confident there are two people still reading. You’re probably friends of mine and know what’s going on anyways. If you’re still here, thanks for reading. I have hopes and plans for this little corner of the interweb. It might look a little bit different than it used to. But, it will still just be tales from the life of Rachel O. 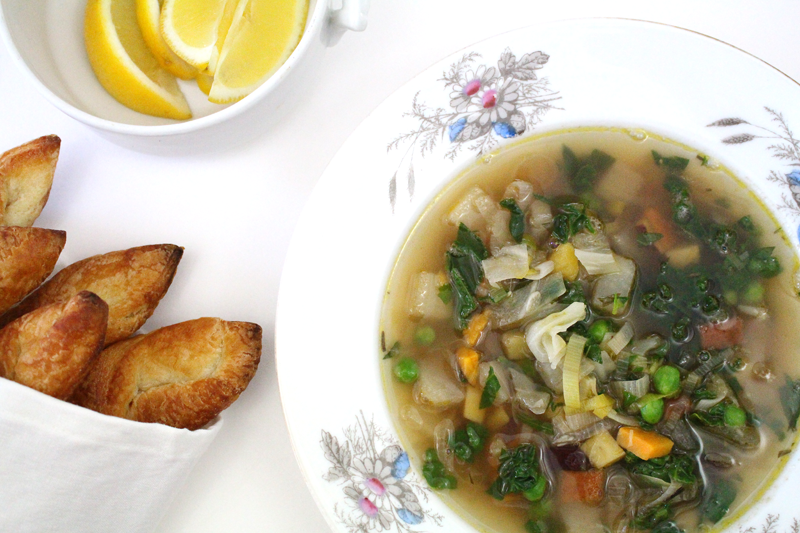 When in doubt, soup! I almost always want to eat soup. In hot weather and cold weather, on weeknights or at dinner parties… give me soup and I’ll be happy with my meal. 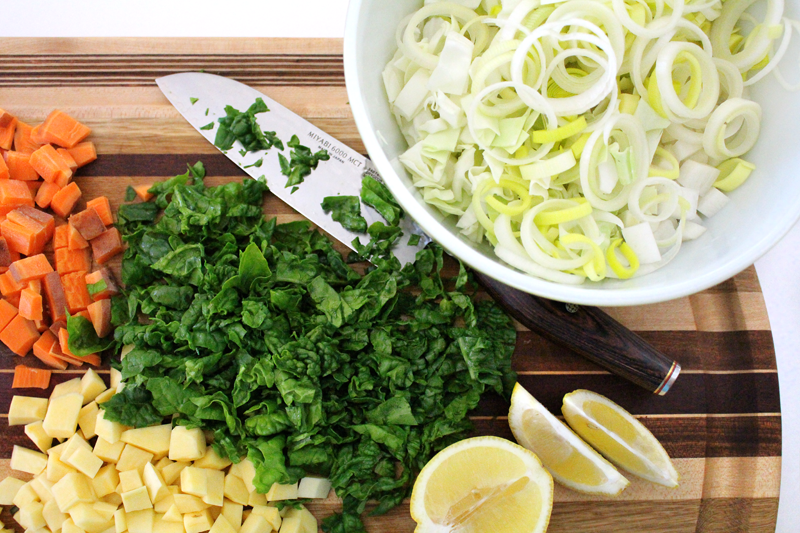 Soup is a great way to use up whatever you’ve got hanging around in the crisper drawers of the fridge too. Sometimes there are forgotten turnips and beets in there that are given a new chance at life in soup. Way yummier than tossing them in the compost or using them for stock.

This week I had things like leeks, spinach, sweet potatoes, peas, and rutabagas on hand. But, you could add or substitute with onions, shallots, kohlrabi, carrots, turnips, radishes, brussels sprouts, broccoli, cauliflower, potatoes, or winter squash.

I wanted to add a little more protein and even more texture to this soup, so I also added beans. I was in the mood for kidney, but black, white, or cannellini would also be fab. And when we get into spring, fava beans would be amazing! I love beans in soup. 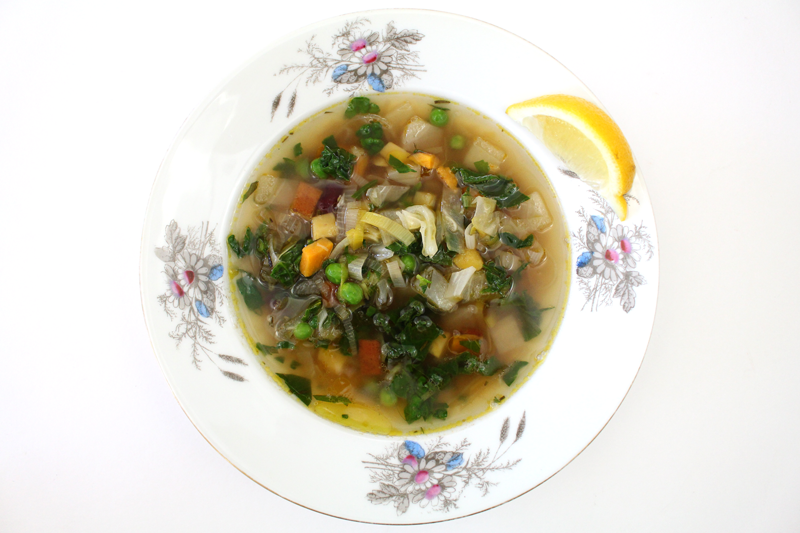 This soup makes for a great lunch or dinner. It’s wonderful with homemade croissants, apple-cheese toasts, or just on its own with a squeeze of lemon and a good book. 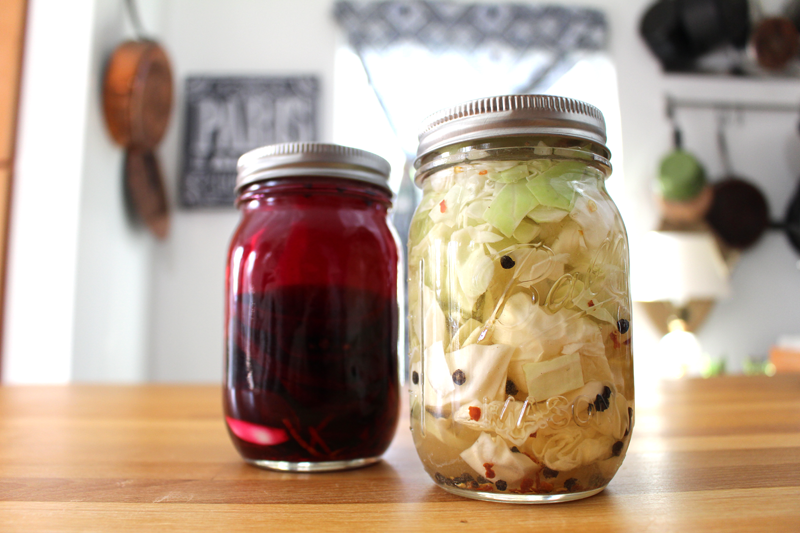 Pickles are one of life’s great mysteries. I don’t quite understand why or how they are so awesome. They just are. They can add so much to a dish. They’re fun to eat. And, they’re a lot simpler to make than I would have thought. I’ve tried to make pickles a few times before. I’ve followed recipes and made up my own. Nothing worked. I tried with raw veggies and lots of apple cider vinegar. Nothing tasted good. So I was a little apprehensive when I was thinking about pickling for a post… But, I have to say, I was pleasantly surprised. 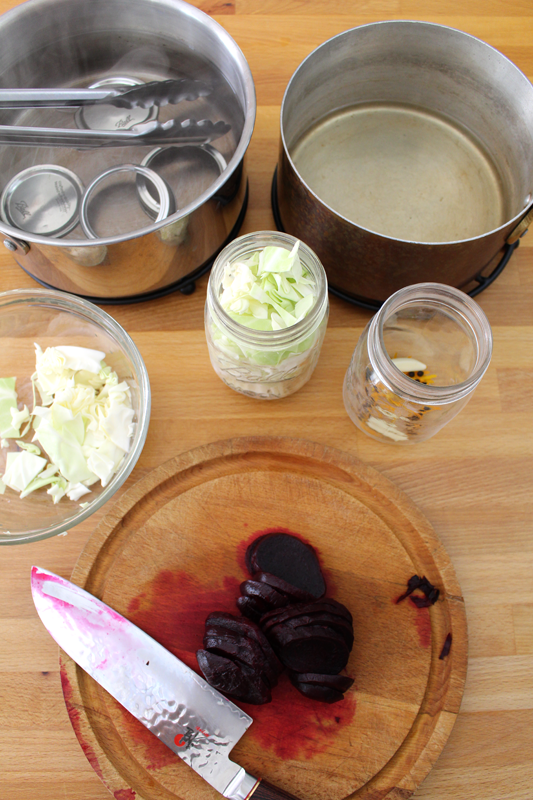 It all starts with some veggies. I chose steamed beets (because I’d tried to pickle raw beets once… nope, not a good idea) and raw cabbage. I used them because that’s what I had on hand. But, I think that with this particular brine, I might also try carrots, cauliflower, radish, green beans, greens, leeks, cucumber, or onions. I’d steam any root veggies and cauliflower, but I’d probably leave the rest raw.

For the brine, I went with white vinegar and rice vinegar. I like their mild flavors. I also added some water, salt, and honey. Water to dilute a bit, honey to counter the sharp vinegar, and salt, well, because I like salt (and I think you’re supposed to use salt when pickling, although this was just plain table salt, not pickling salt). 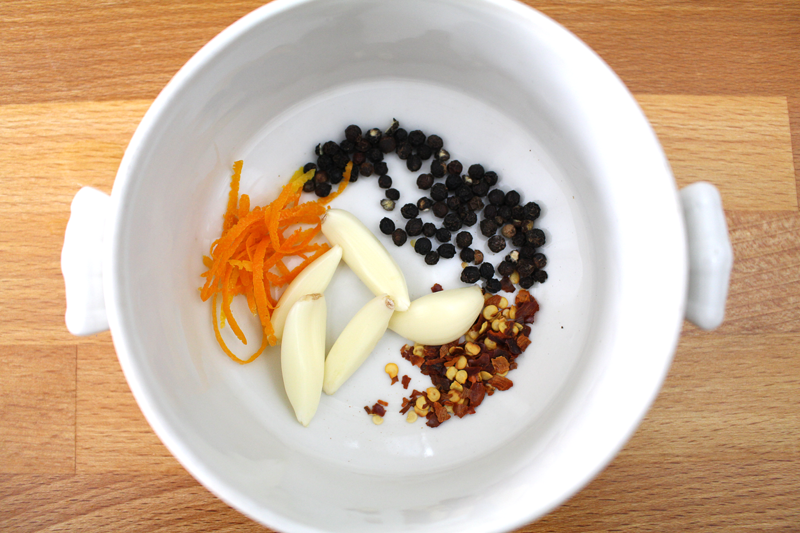 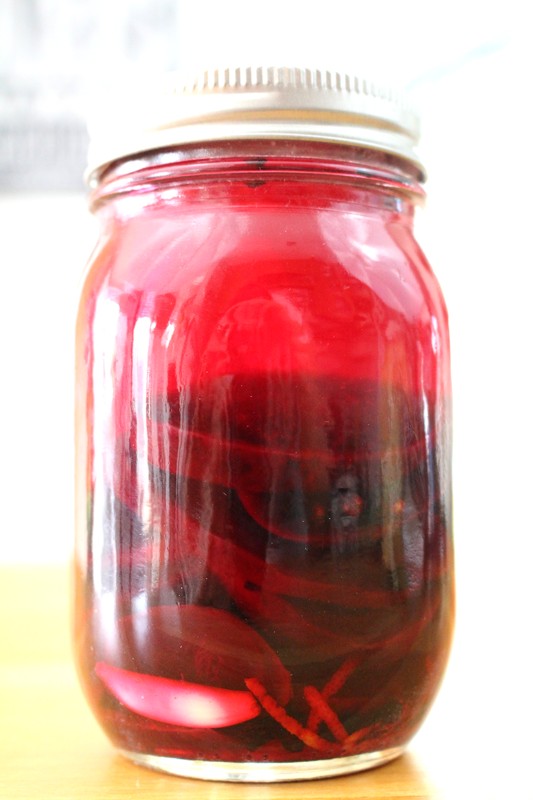 I let them sit for about a week and a half in the fridge before trying them. I don’t know if I needed to, but I did. 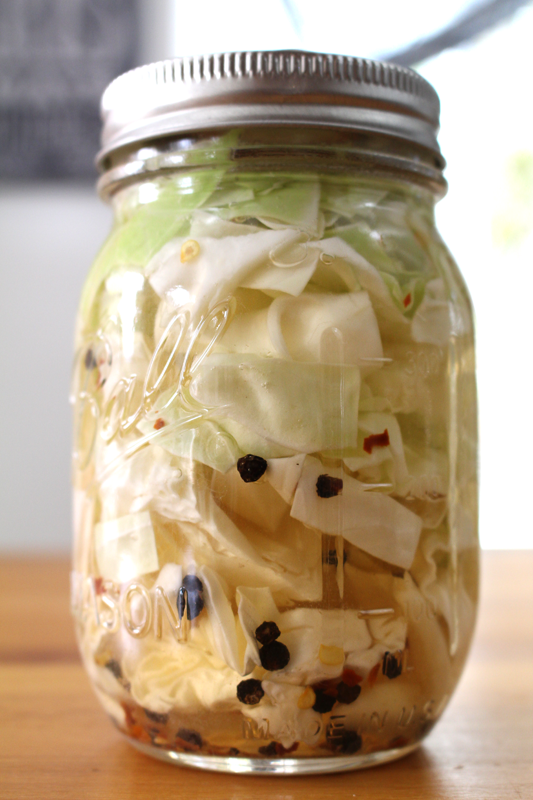 Now that they’re open, I’ve eaten the pickled beets 3 days in a row. I just can’t get enough. Tim even tried one the other day and didn’t hate it. He wasn’t crazy about the texture of the beets (they’re soft, like they are when steamed), but he really liked the flavor of the brine. For me, the beets are exactly the texture I was hoping for. They’re tender and vinegary with just a hint of sweet. And the cabbage, it’s gone. I ate it. All. By. Myself. I tried it raw, I added it to a stir fry, and I added it (and the pickled garlic) to some lentils and topped it with a fried egg, paprika, cayenne, and chili powder. I can’t wait until the next time cabbage comes in our Abundant Harvest Organics box. I know exactly how I want to use it. 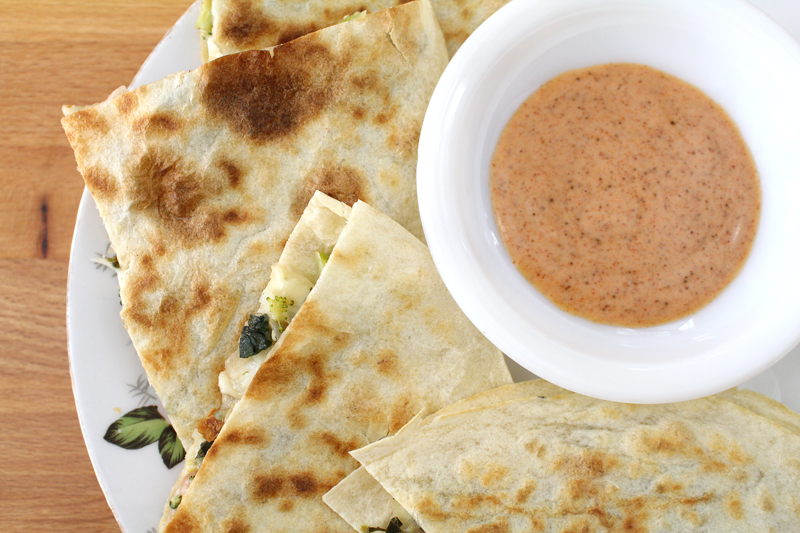 When I plan our menu I try to include a good variety of foods, so we don’t get bored. Sometimes they’re a little more complex, have multiple steps, and more ingredients. Other times they’re simple, basic, super easy. Scrambled eggs and toast makes a great dinner. So do quesadillas.

Quesadillas are probably our go-to, in a pinch, anyone can make it meal. If I’ve planned ahead, I will try to add some beans so it’s not just tortillas and cheese. If I’ve really planned ahead, we may even have homemade tortillas. But, sometimes, just the basics will do. We just need to eat something, and we need to eat that something right now. 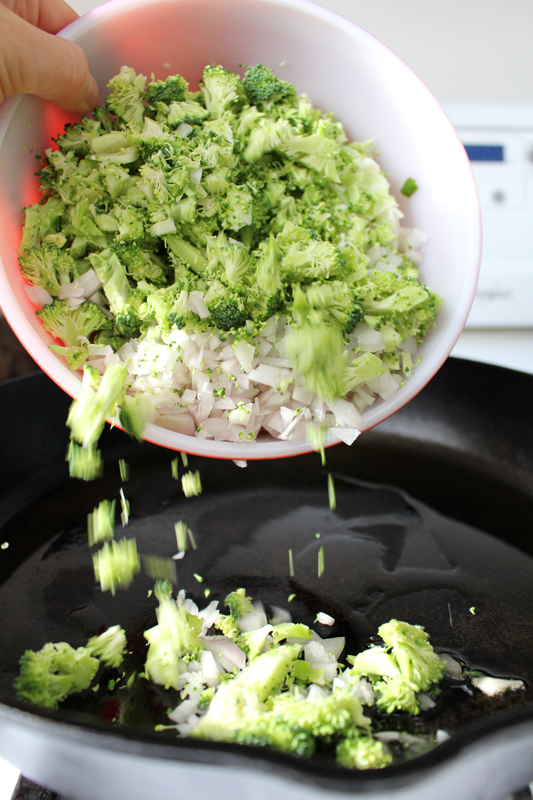 This recipe is a happy medium. I had time to prep and plan, so there are both veggies and beans. I also made a lot and froze the leftovers, so next time we want quesadillas, the filling can be pulled out and reheated. These are pretty versatile. I just took what I had on hand that I thought would go with beans and cheese, finely chopped it, and threw it into a pan. 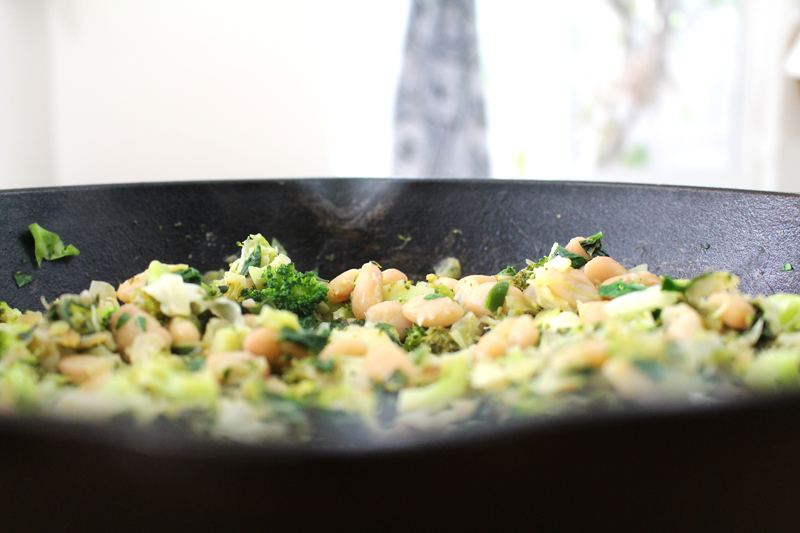 While the veggies and beans cooked, I whisked together a quick dip. But, if there’s no time for dip, or you’re out of yogurt or silken tofu, salsa will be just fine. 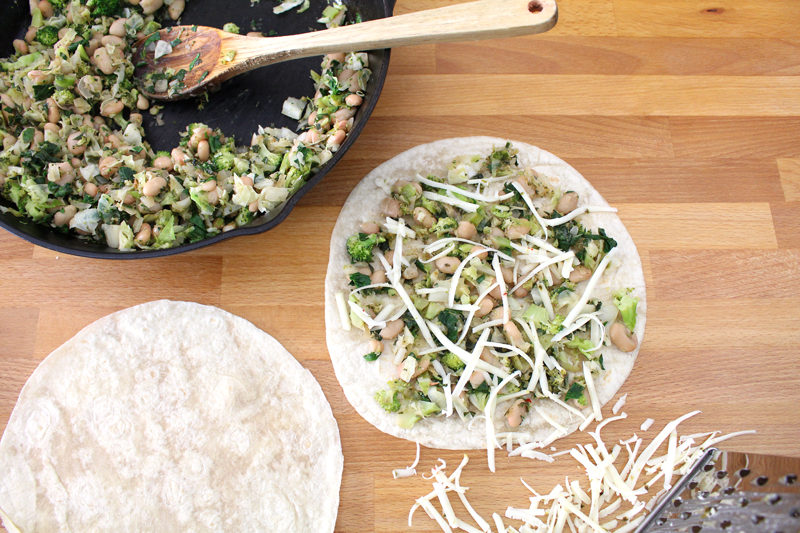 I added pepper jack this time. It’s a great melting cheese and I love the spice that it adds. If you don’t do dairy, I’ve heard that nutritional yeast is great. 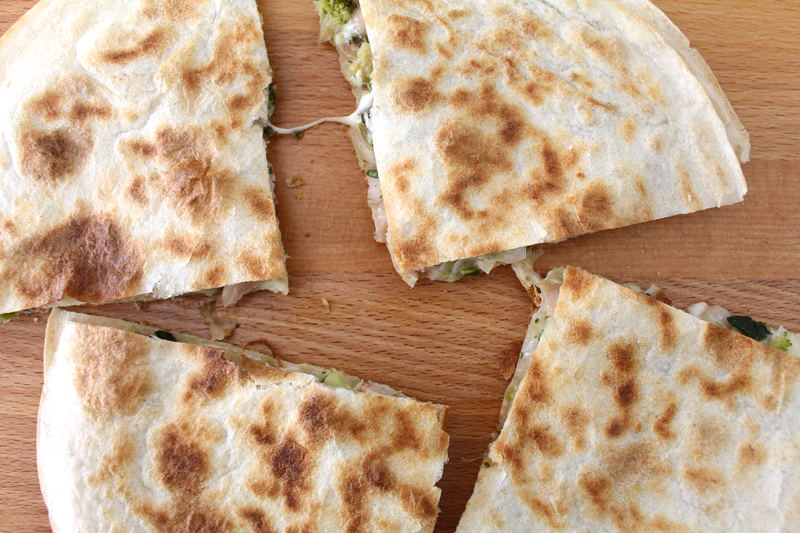 I like my quesadillas super crispy outside and gooey inside. Tim prefers his a little less crispy. I used flour tortillas this time, but corn would be fabulous too. I had been working on another recipe on the same day and I wasn’t hungry when these were done. So I cooled them and saved them for dinner. When I reheated them they had an awesome crisp to them that I totally wasn’t expecting. Almost like the cooling and reheating had done something awesome to the layers in the tortilla. I’m totally down for cold leftovers (mostly because I’m too lazy to heat them up). This time I’m glad I took the time. 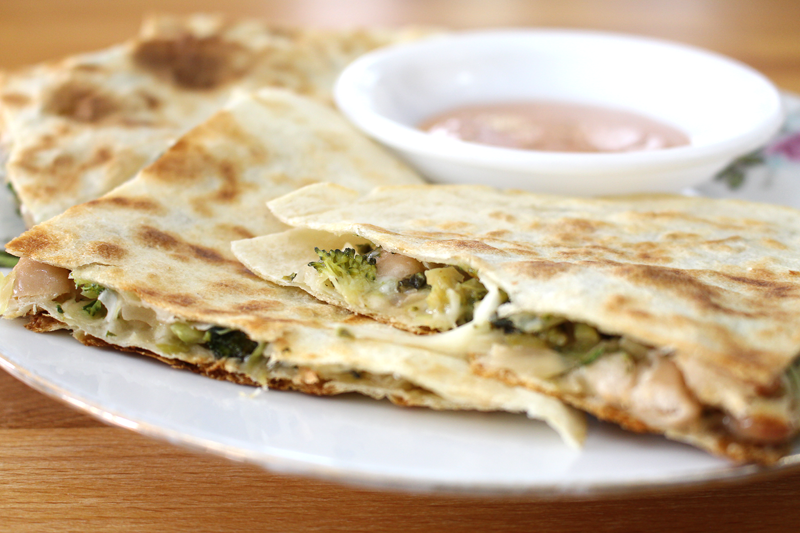 I’m sure we will be enjoying these again soon. I’ve almost always got quesadillas on the menu and ingredients for them in the fridge.

Salads get a bit of a bad rap as a “diet food”. Ugh. I don’t even like the word “diet” and I really like salads. They’re a great compliment to so many foods and can even be a wonderful meal on their own.

The salad that I’m talking about here is a veggie filled chopped salad that could fit into both categories. It would be fabulous paired with a stir fry, some roasted chicken, or a big bowl of chili. But, add some crispy tofu or chicken to it and it turns into the main dish. 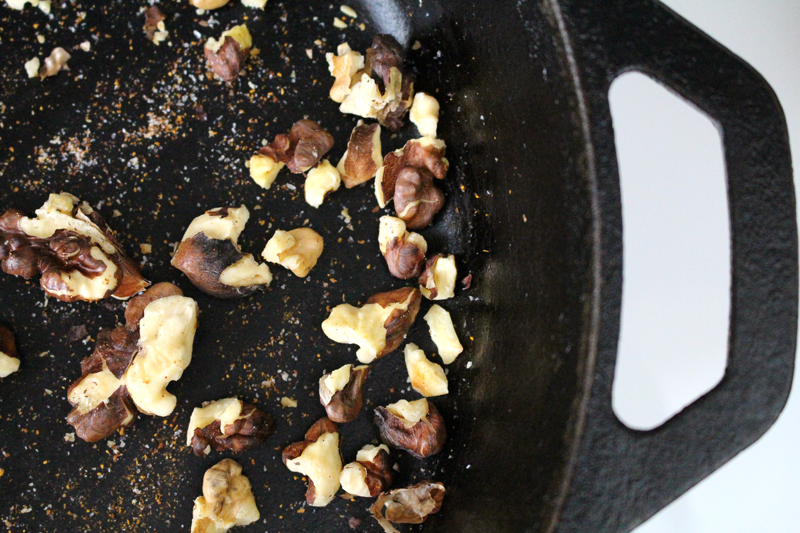 I love a salad with lots of great crunch. It can come in the form of great raw veggies, seeds, and one of my favorites: nuts. For this salad, I chopped up some raw walnuts from my in-laws’ tree. I toasted them on the stove top for a few minutes, then tossed them with some spices. 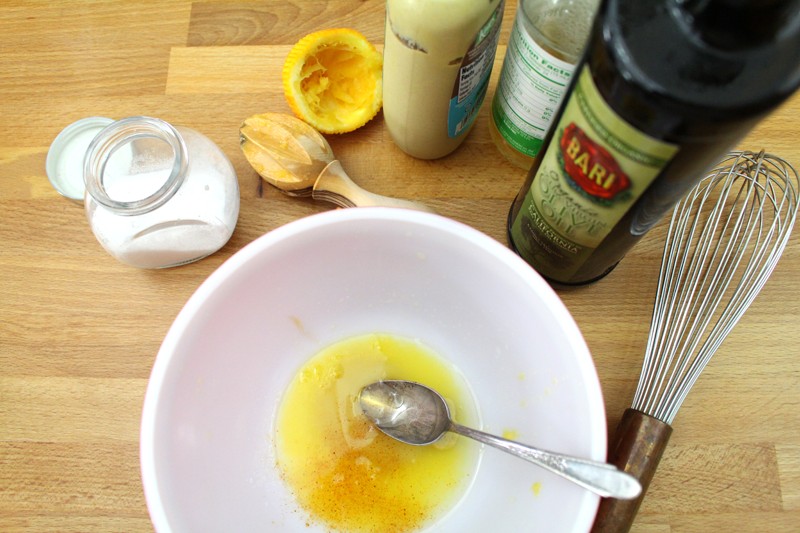 For this wintery salad, I thought a great honey-mustard dressing would be the perfect compliment. It’s a simple mixture of honey and mustard, of course (if you don’t do honey, try some maple syrup), along with some fresh squeezed orange juice, rice vinegar, and olive oil. I love creamy slaws and salads, but sometimes I want something a little bit lighter. This was perfect. 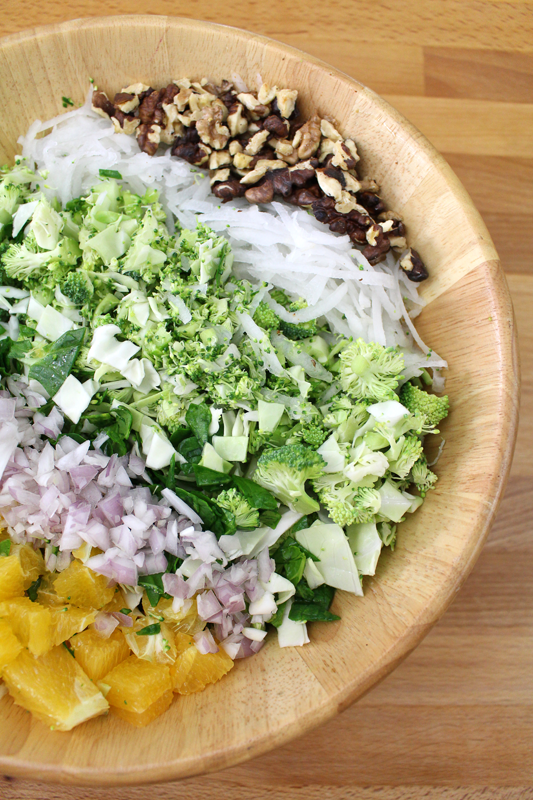 I used what I had on hand for the rest of the salad: broccoli, greens, cabbage, radish, shallot, and chopped orange. You could totally substitute with carrots, cauliflower, and red onions. You could use leeks and any kinda greens that you think would taste good (like bok choy, spinach, kale, mizuna…). It’s kinda like a cross between a chopped salad and an awesome coleslaw. Call it what you like, as long as you call it… 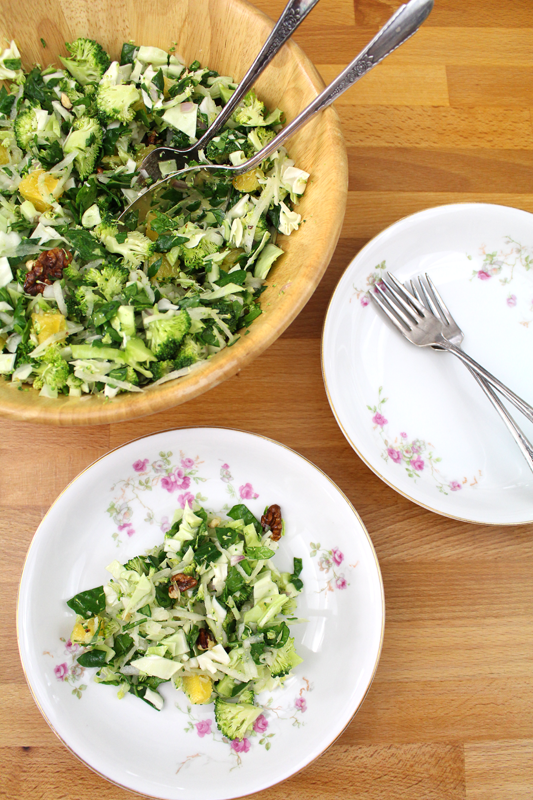 It’s great to take to a potluck, to enjoy alongside a grilled cheese sandwich at lunch, or to go with a tasty Chicken Pot Pie for dinner. Done, done, and done. 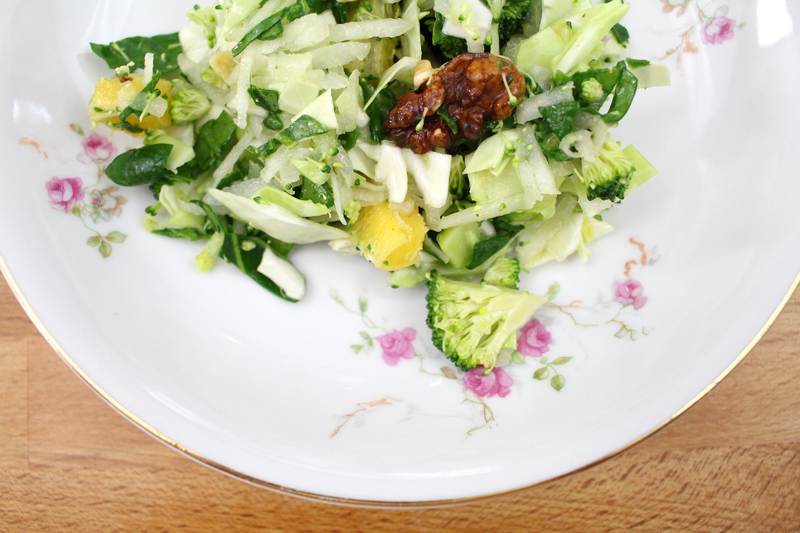