How to Compost Reuse and Recycle

Written by Rachel, Posted in How To, Thoughts 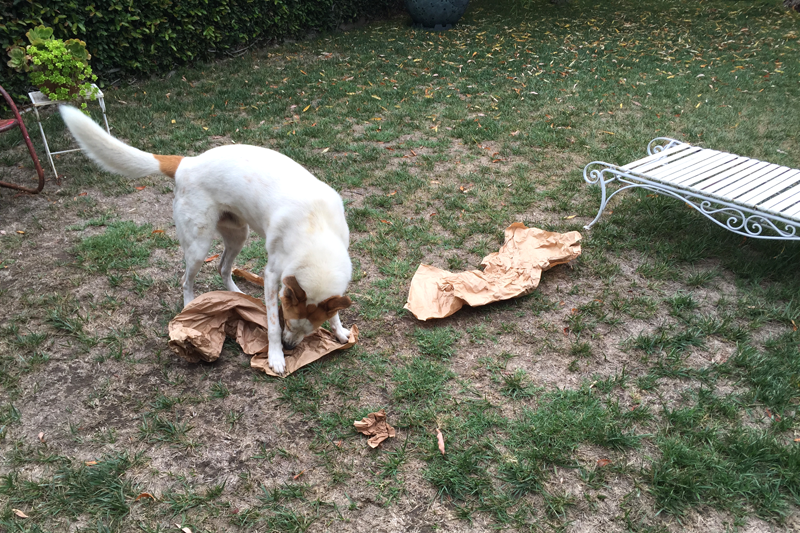 This summer I wrote about conserving water in the kitchen. Now, let’s take that conversation one step further, and let’s talk about composting, reusing, and recycling.

We live in the city, but I have a small garden, so I have a composter in the yard. It’s a ball with a lid on either end that can be rolled around the yard to turn it. It looks like the Death Star (it gets some weird looks from people walking by). My parents have always composted, Tim’s parents do too, so it’s something that’s ingrained in me. It’s not something that I know a lot about, so I’m learning as I go. But, so far it’s been a great addition to my garden.

My rules for composting are as follows:

All fruit and veggie scraps go in, even those that aren’t organic. While I don’t want pesticides in the garden, I still feel like it’s better to have those scraps in the compost than in a plastic bag in a landfill. That’s just me. I’m not super picky. So we add egg and nut shells, fruit pits, and seeds.

Cardboard goes in if it hasn’t been printed on. Usually this is egg cartons and toilet paper rolls, torn into small pieces. I skip the cereal boxes, because I’m not sure about the shiny printed on side.

The butcher paper from the weekly box of produce from Abundant Harvest Organics gets torn into small pieces and added(usually the dog will help with this chore – you can see a video of him “helping” here).

Paper towels and tissues, as long as their not super gross.

Compostable packaging (some companies have made things like chip bags, forks, plates, cups etc out of biodegradable vegetable products).

Things that we don’t add: Animal products (meat, dairy – mostly because we don’t want to attract animals and because of the smell), large quantities of oil or leftovers. Leftovers will just depend on their makeup and amount. I think that a little bit once in a while isn’t too bad. 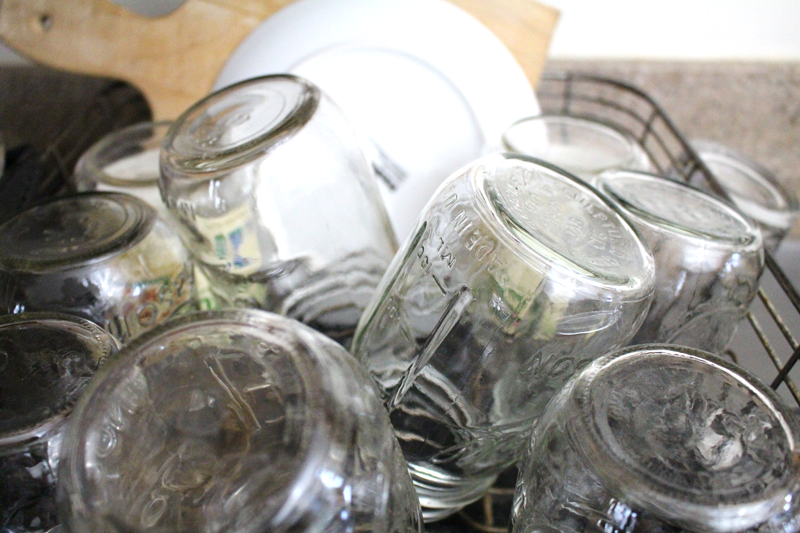 When I was a kid, I was the one whose sandwich was in the washed milk bag (I grew up in Canada – milk comes in sealed plastic bags). At the time, sooo embarrassing, amiright?! But now, I totally get it. Twist-tie plus milk bag is a perfectly acceptable sandwich holder. Since I don’t live in Canada anymore, we wash and reuse any ziptop bags instead of milk bags (unless they’re way grody).

I often save peanut butter jars, salsa jars, and sometimes even a wine bottle or two. The jars are washed and saved to store things like leftovers, homemade veggie stock, and homemade yogurt. We wash the wine bottles, and Tim has scraped the labels off them, and we keep them filled with water in the fridge (and we have a few more empties on hand in the cupboard for when we host dinner parties). These jars (especially super cute mason jars) can be washed and used if you’re short on drinking glasses. They can also be used to store fresh herbs and flowers. Once you’ve scraped the label off (a razor blade works great for this), a bit of burlap could be wrapped around a jar, or a ribbon or some string could make a nice bow, and they’d make a nice centerpiece for your dinner party table. 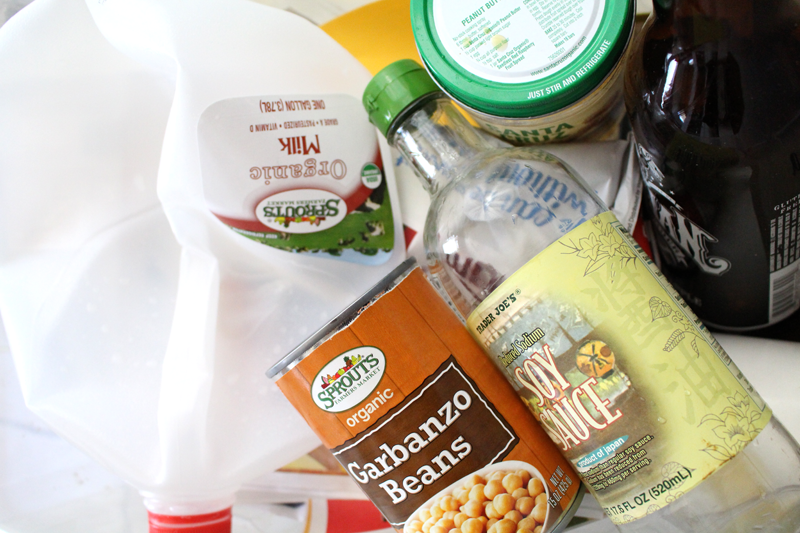 There’s a lot that can be recycled rather than thrown in the trash. Cans, glass bottles, plastic, and even some types of styrofoam (although some is now corn-based and can be composted). Many grocery stores will take your plastic bags and recycle them (they shouldn’t be added to curb-side recycling as they can get caught in the sorting equipment at the recycling center). Depending on your location there may be different regulations, so check into them so you know what’s acceptable and what’s not.

Another option is to collect containers for cash. It takes a while to collect enough to make any serious money. But, when every little bit counts, it can make a difference. My very first job, if you can call it that, was a “company” that my friend and I started. We’d pull our wagon around our neighborhood and ask the neighbors if we could have their cash refund applicable recyclables. Then we’d take them to the recycling center and get money for them. I don’t think the business lasted long, but the idea was a solid one. There are people who collect recyclables for charitable organizations too. You save ’em up and bring them on a designated day and they’ll do the rest.

We can all do more to lower the amount of waste that we’re producing. Recycling, reusing, and composting are three great ways to start. Even if you start small, it can lead to big changes. Our commitment to wasting less has led me to be more mindful about what I buy. I try to avoid products with excessive packaging, I prefer glass over plastic, and I bring reusable bags to the grocery store. There’s always going to be more that I can do, but it’s a great place to start.