I’m blessed to have two brothers. But, until I got a sister-in-law last year, I had zero sisters. However, my cousin, Jill and I are as close as sisters. She’s one of my best friends. She lives in Colorado with her family, so we make up for the distance with visits, Skype chats, phone calls, emails, and texts. She and I were devastated at the loss of our Oma a couple of months ago. We both inherited a love for cooking from her. Jill, however, must have inherited the baking side of it much more than I. She’s a great baker. I asked if she would share Oma’s recipe for Moon Cookies.

I know what you are thinking, it’s why are these called moon cookies yet they are shaped like stars?  Well honestly it is just because I don’t have a moon shaped cookie cutter.  Every time I make these cookies I am already far too deep in the process to stop, go to the store and get the proper shape, and every year I seem to forget that I don’t have a moon shape so I choose the next best celestial object, a star.  But Oma, whose recipe this is, always made them in moon shapes, hence the name.  Everyone in the Pries family knows what a moon cookie is.

This recipe is special for many reasons, most importantly because it was Oma’s.  And everything from Oma is special.  Secondly, they are insanely delicious.  One of the ways Oma loved her family was through food. She always had lovely treats and amazing meals waiting for us whenever we would visit.  Some of my fondest childhood memories take place in her kitchen, whether it was baking Zwieback and honey cookies, or sitting under the kitchen table first thing in the morning to warm up by the vent, or having Opa help me crush my crunchy buns into my bowl of “Opa” soup.  Of all the many traditions Oma passed down, a love of the kitchen was definitely one of them.  She was always eager to teach us and to pass down these special family recipes.  She had a servant’s heart and loved her family so much through everything she did.  I can only hope that I can make my family feel as loved and as precious as she made us feel.  Oma – I love you and I will keep trying to learn to crochet dish clothes, even though they always end up looking like cat toys!!

And now a special word of caution…..do not eat these cookies while wearing black.  The evidence will be all over you. And that is especially bad if you happened to indulge yourself when you really shouldn’t have or were flat out told not to, like a certain three year old boy who disappeared behind the sofa for a few minutes and then reappeared with lovely white fluff all down his front.

For Oma and Her Borscht – Beet and Beef Borscht 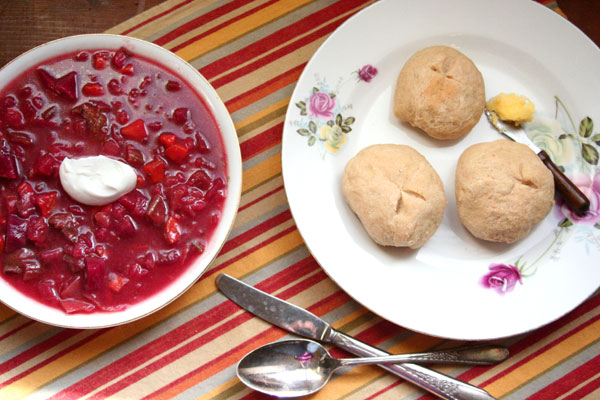 This post is for my Oma, who will probably never read it, as I’m quite certain that she’s not online.

My Oma is a wonderful cook. She’s one of the best, in my opinion. When we were little and we’d go to visit, she would have Chicken Noodle Soup for those of us who hadn’t yet discovered the wonders of Borscht. I didn’t know what I was missing! Her Borscht is amazing! She has two different kinds: Beef Borscht (I don’t know if that’s the real title, it might also be called Winter Borscht) and Sommer Borscht (pronounced like Zumma). I had the Sommer Borscht recently for the first time and it’s oh so good. She also makes Zwieback (the buns being made by me in the above photo), which I have memories of making with her as a small girl. I’ve made them since, as a grownup, and while they’re not quite the same, they’re pretty good (I have her Zwieback recipe, in her handwriting, so they’re as close as they can get!). 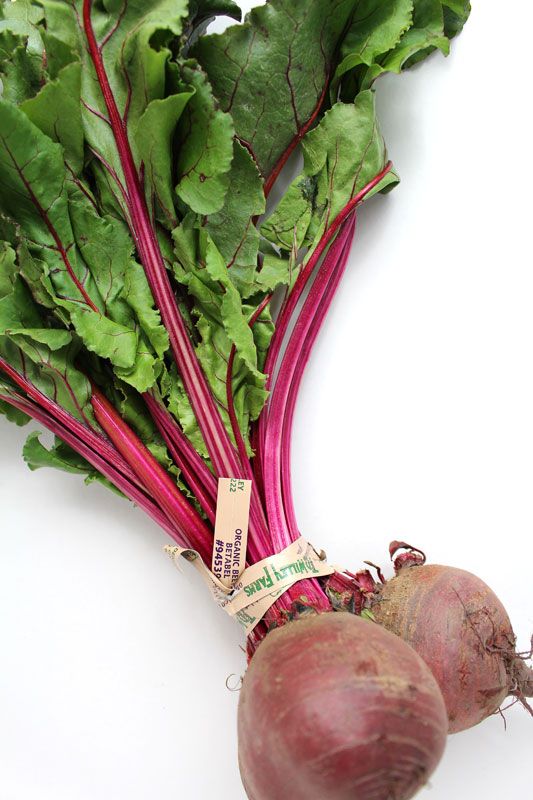 Oma’s Borscht is made differently than mine, but they’re the same idea. A meat and potatoes soup that has a dollop of sour cream on top. I make mine with beets (which I’m told she doesn’t) and she makes hers with dill (which I don’t). There may be other variances too, but those are the main ones.

I think Borscht came from a time where people used what they had out of necessity. I used what I had (beets) because I wanted to (and because it’s the only way we like beets in our house). This is how I normally cook, and why most of my recipes are uniquely my own. Some are inspired by a magazine, a blog, a cookbook. Others are concocted by standing in front of the pantry cupboards, or the fridge with the door open (I used to get in trouble for this as a kid) summoning my creative culinary skills to create something delicious. Either way, I’m often inspired to use things that we already have, often that have come in our Abundant Harvest Organics produce box, in a fresh, creative way.

I’ve made Borscht many times before, but until recently, had never written it down. So, here’s my most recent version, probably slightly different from any other, but good none-the-less. 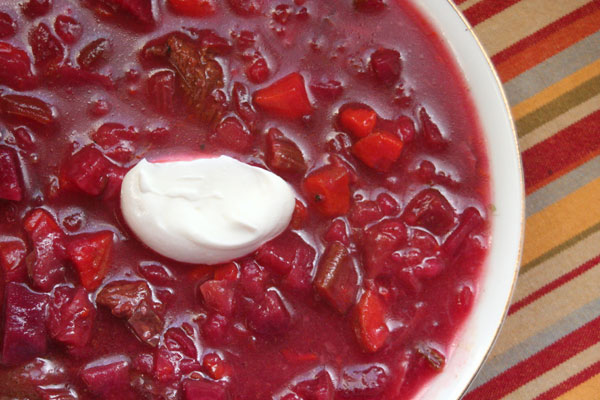 *To make it vegetarian, omit beef, and use vegetable stock.