Written by Rachel, Posted in How To, Storage/Prep, Thoughts

The more we do something, the more we know about it. It’s just that simple. I started cooking on a more regular basis when I moved away from home. I subbed for my roommate on her day off at the school we worked at a few times. My roommate was a trained chef. I was not. I’d learned a few things from my mom, who is also a great cook. But, I hadn’t done a lot of cooking.

So, I learned the hard way that you really should soak dried beans before adding them to the pot of Spicy Chicken Chili. It’s easier than having to pick them out by hand after you’ve added the beans. I learned about a year into marriage that putting hot soup into a blender and not removing the plug in the lid will result in the plug falling into the soup and blending with it. A clean tea towel over the hole in the lid works much better.

I’ve learned a lot over the years. And I’m so happy to be able to share these things with you!

Here, in no particular order, are my top 10 kitchen hacks:

1. Tea Towel in the Produce Drawer

I like to place a clean tea towel in the bottom of the produce drawers. I change it each week, and I think it helps cut down on moisture and mold. Plus, having to remove what’s still in the drawers each week lets me wipe out the drawers, and see what’s in there and make a note of what needs to be used up in the week’s menu. 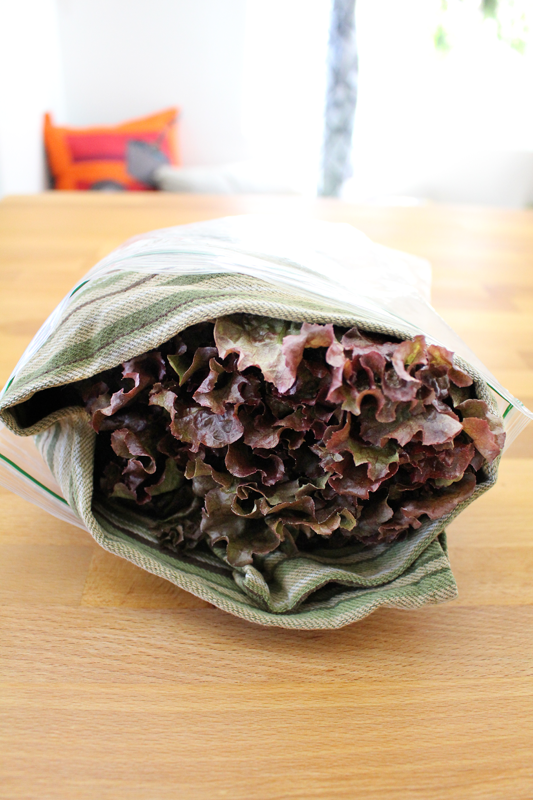 2. Wrap Greens in a Tea Towel Before Bagging

I used to just pop the lettuce or greens into a zip top bag. That works fine if they’re going to be eaten quickly. But, sometimes we don’t go through it as quickly as I’d like. So, I started wrapping each head of lettuce (and chard, kale, collards etc…) fairly tightly in a clean tea towel, then putting it into the zip top bag (and sealing every few inches of the top). When I was photographing for this post I realized that I had three heads of lettuce in the fridge. One from March 24th, one from March 31st, and one from April 14th. They were still all edible – the older ones had a few leaves that went into the compost, but other than that, they were still good. I think that the moisture that the tea towel absorbs helps to delay the decay of the greens. 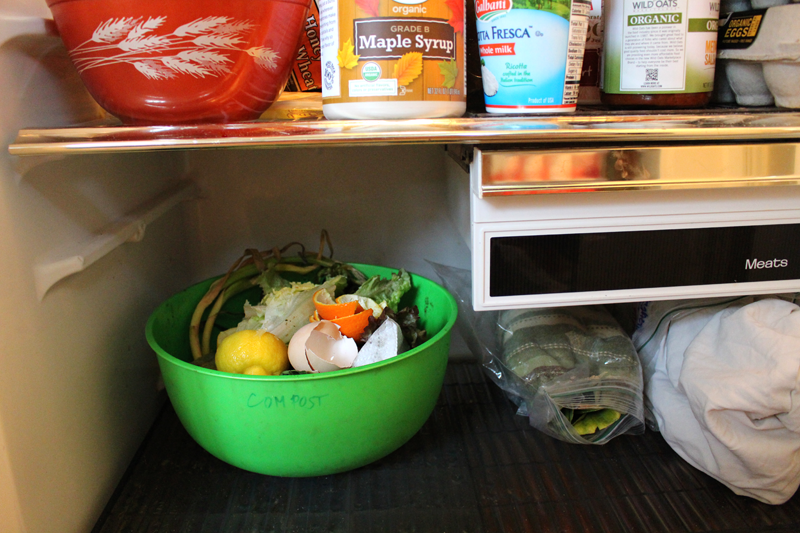 3. Compost Bowl in the Fridge

We’ve been composting for years, but it wasn’t until we moved into a home with a yard that we were able to really take advantage of it. One thing that I’ve always been great at is collecting fruit flies. So, I’ve started keeping a bowl in the fridge where anything compostable sits, sans flies. Our composter is just a few steps outside the door, so it’s not such a chore to empty it often. 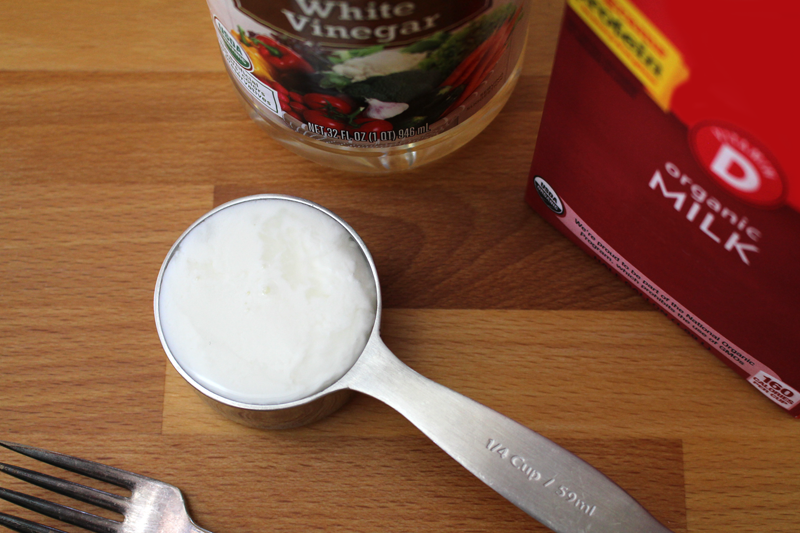 I don’t think I’ve ever bought buttermilk. It just seems like I’d have to buy too much for what I usually need. Instead, I pour 1 T white vinegar into the measuring cup and fill to the desired amount of milk (you may need a bit more vinegar if you’re doing more than 2 cups of milk). I’ve heard that lemon juice also works.

5. Boil Water with the Lid On

This one’s simple – when boiling water, stock, soups etc., they will come to a boil faster if the lid is on. Yeeeeeah science!! 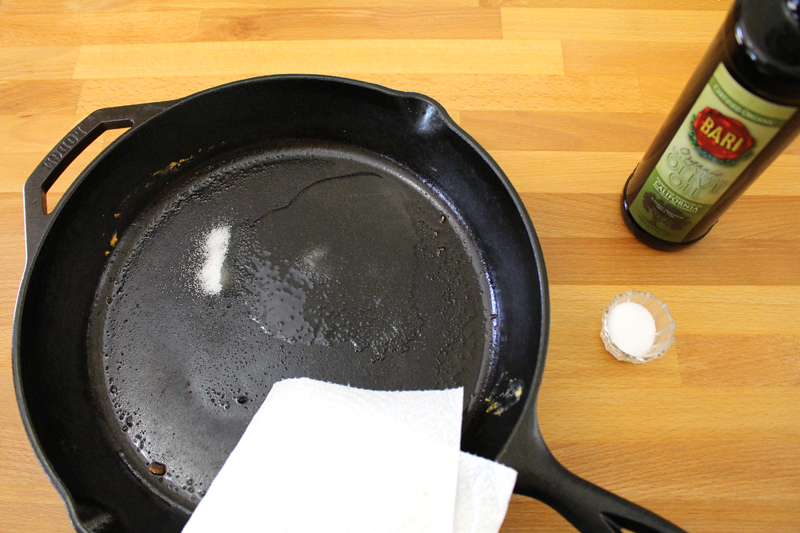 6. Use Salt and Oil to Clean a Cast Iron

I usually just use a scrub brush and hot water to clean a cast iron. But, sometimes I forget to clean it right away and it sits. Or something just gets really stuck on there. What’s worked for me is some coarse salt (table salt works too), oil, and a paper towel or a clean rag. Scrub, scrub, scrub, then rinse and dry. Make sure it’s cooled down before you handle the oil soaked towel. That oil will get hot if the cast iron is still hot, and that hot oil will soak through the towel quickly.

Another cast iron tip – save one for sweet dishes only. That way, if you’re making pancakes or a cake, they won’t taste like onions and garlic. 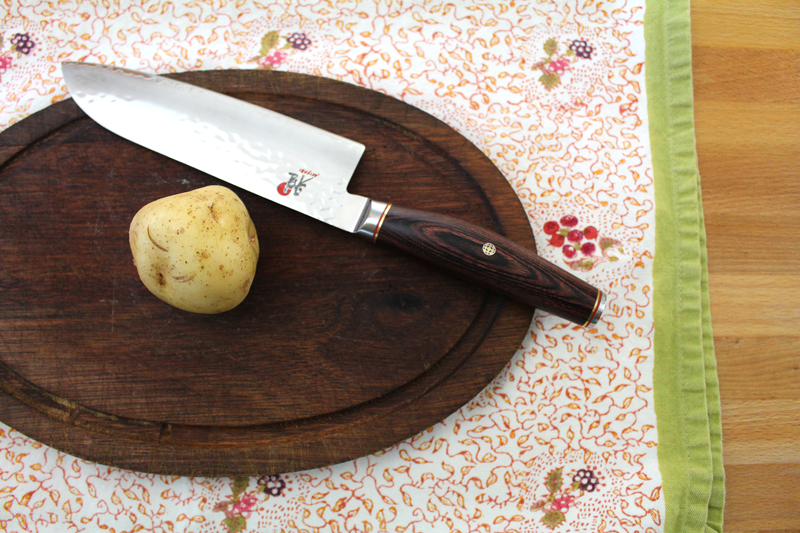 7. Use a Tea Towel to Keep Your Cutting Board From Slipping

Ever start chopping only to have your cutting board slide away? Annoying and super dangerous. Many cutting boards come with non-slip feet, but I have a few that are older – warped by water and time, and they slide and tip. Placing them on a tea towel helps to eliminate both. 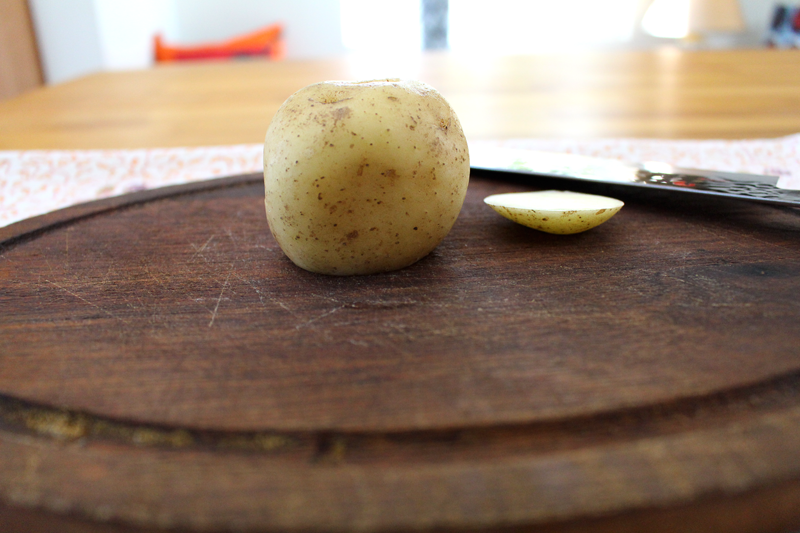 8. Cut the Bottom off Round Fruits and Veggies to Stabilize for Chopping

You know how it is, you set your potato down to chop it up and it rolls away. Since you’re probably going to slice a few bits off anyways (did you know that you can plant those eyes?), the simple solution is to slice off the bottom of the potato, giving it a stable bottom. 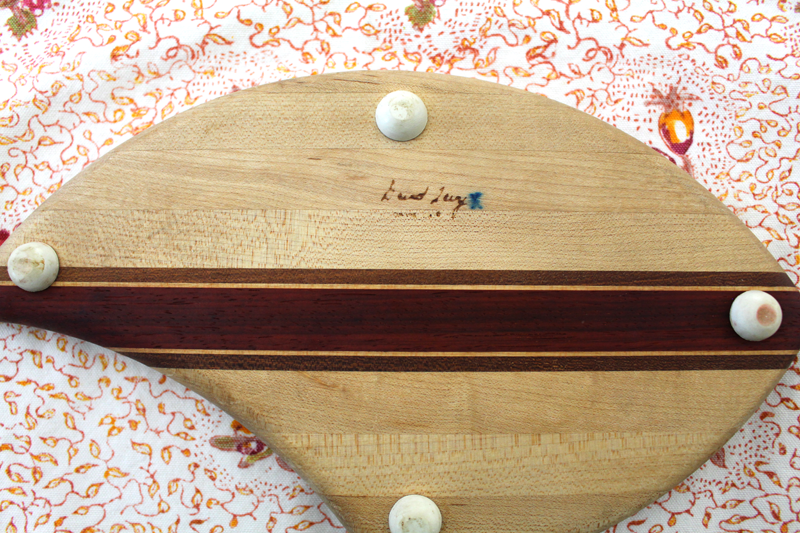 9. Designate a Cutting Board for Onions and Garlic 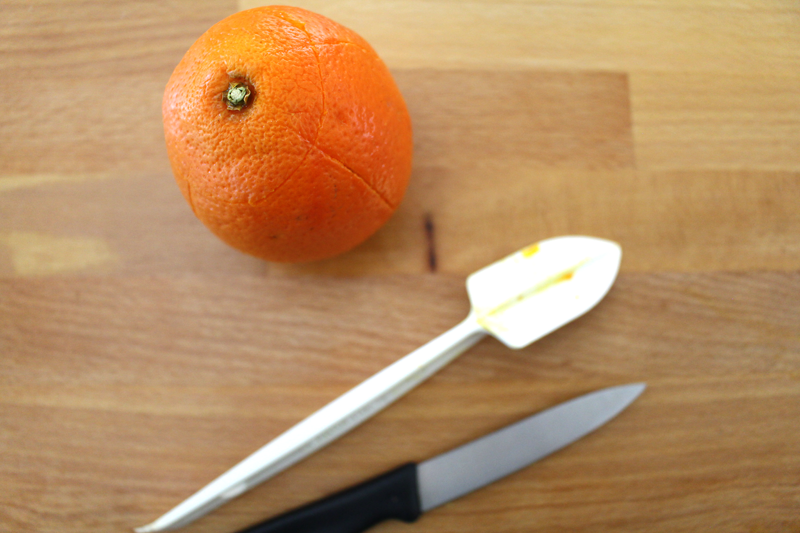 10. Score an Orange so it’s Easier to Peel

We’re just finishing up citrus season, but I’ve still got a fridge full of oranges. I find it easiest to peel them when they’ve been scored with a paring knife, or a special orange knife. Then the flaps can easily be lifted up, so the peel can be removed.

These are some of my favorites. Do you have any tips, tricks, and hacks to share?

How To Use Leftovers

Written by Rachel, Posted in How To, Leftovers, Thoughts 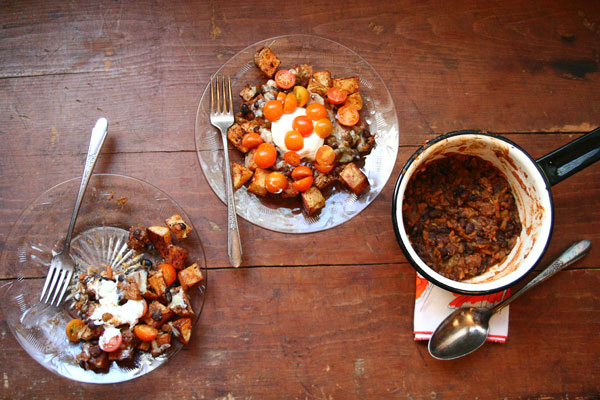 We’ve all been there. I know I have. I seem to have a problem cooking for two (or, let’s be honest, however many I’m cooking for) and we always end up with leftovers.

There’s something so satisfying about making yesterday’s dinner into a totally new creation.

Are you with me? Or are you squinching up your nose in disgust?

Let me convince you with a few ideas for what to do with some of the meals you might be preparing right now, with our in season produce. 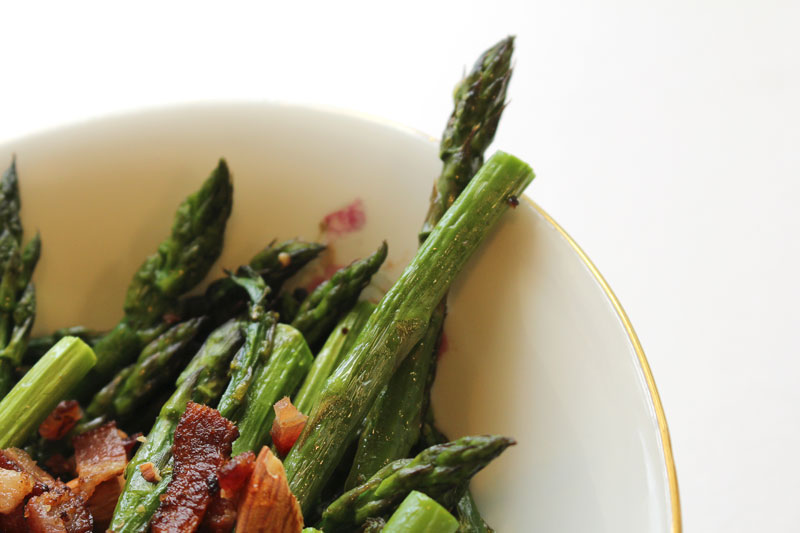 Did you make the Roasted Asparagus with Almonds and Crispy Bacon‚ that I posted not too long ago? (If you didn’t, please take a quick break and do that, so you can enjoy it as much as I did. You back? Ok, good.) You’ve probably also made some Roasted Radishes‚ and Crispy Potatoes?

So now dinner’s over and they’re sitting in your freezer, turning into a solid brick of unrecognizable something, waiting for inspiration to hit.

Well, do you have eggs? Milk? Cheese maybe? Salt and pepper? Of course you have salt and pepper…. This is gon’ be easy. We’re making a frittata. 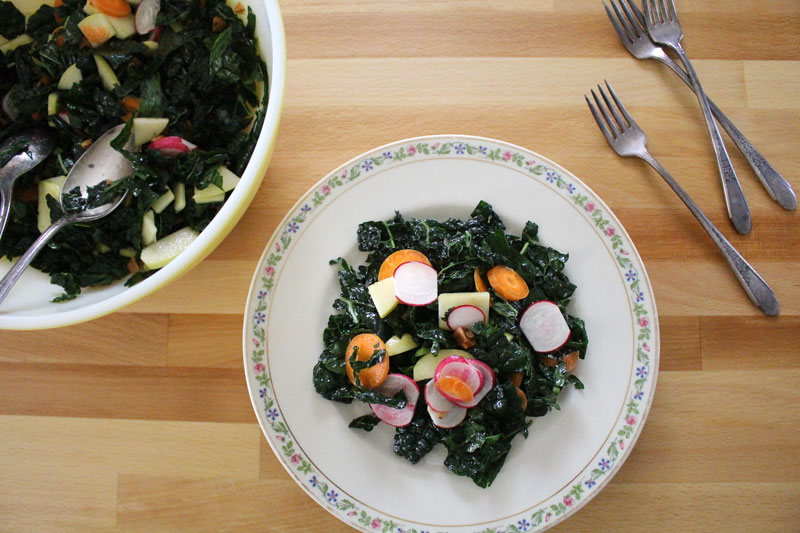 You could add more veggies. You could chop up some fresh veggies too, saute them for a few minutes first, then the softness will be on par with the already cooked ones. Same deal with the Massaged Kale Salad that you have leftover (you’ve tried this, right?!). Basically, we’re making a Spring Frittata. Don’t forget the spring herbs are bursting with flavor right now, so add them liberally to the frittata, before you pop it into the oven and when you’re serving. 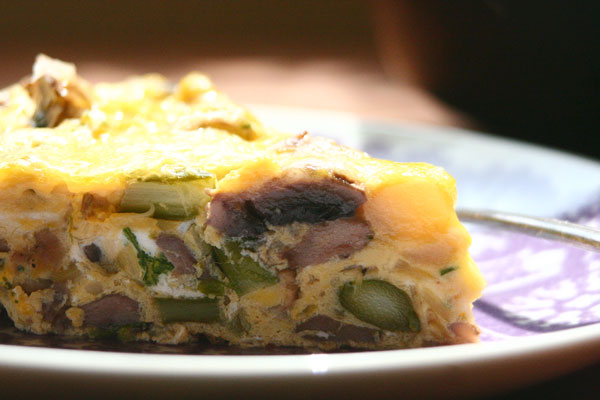 If you’re not in the mood for a frittata, that’s cool. You could take all of the same containers of leftovers and toss them with some vegetable stock and make a soup. Add the herbs too. Done. There’s dinner. (Or toss the asparagus and radishes with some pasta or rice, chop up some leftover chicken and you’ve got a great one dish dinner.) 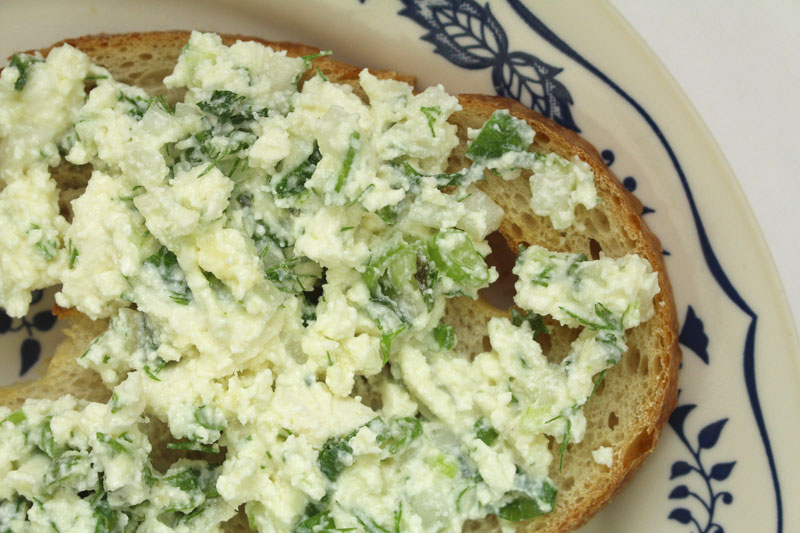 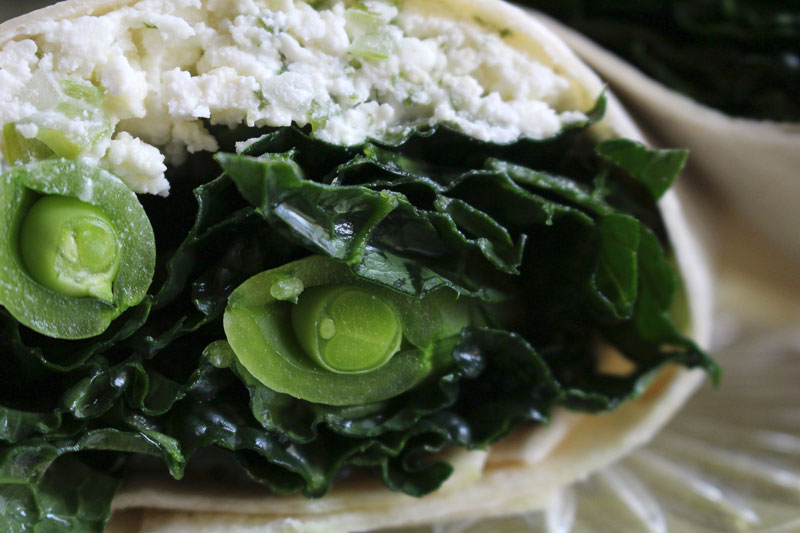 Next, let’s talk about those Radish and Feta Toasts that I made a while ago. I hope that you took my advice and served the leftovers wrapped up in a tortilla (or a pita, hello!). I think I ate this two days in a row. I couldn’t get enough. 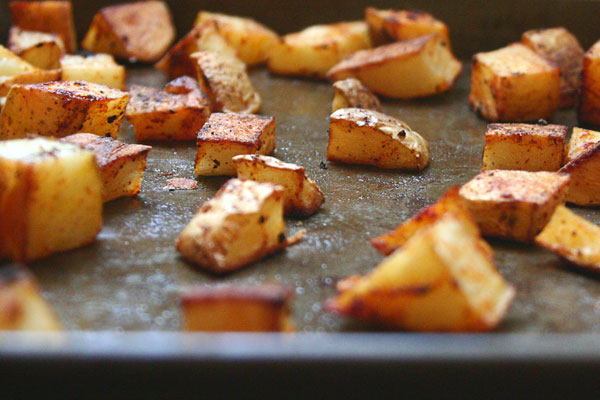 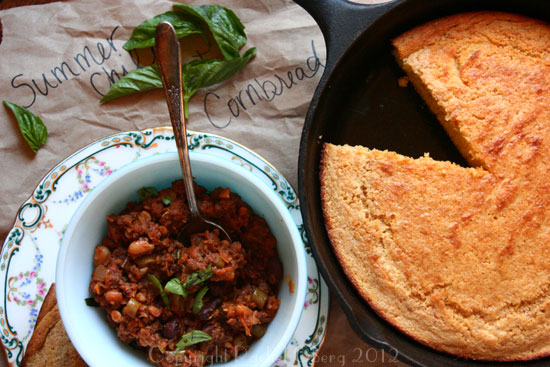 Maybe you made some Summer Chili, but don’t want to eat it the exact same way a second or third time. I mean, I’m almost always in the mood for chili, especially if there’s cornbread. Buuuut then one day I plomped the chili onto some Crispy Potatoes (also leftovers – re-heat in the toaster oven in tin foil until hot) and magic happened (uh, not for real, but it seemed like magic). It became Crispy Potatoes with Chili and Cheese. 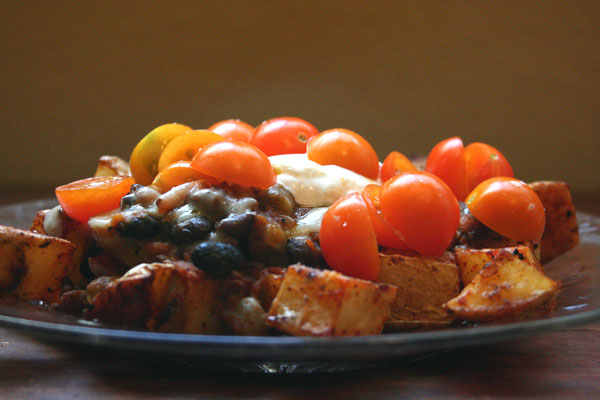 Also, this Summer Chili, one of my all-time favorites. So good so good soooo gooooood. 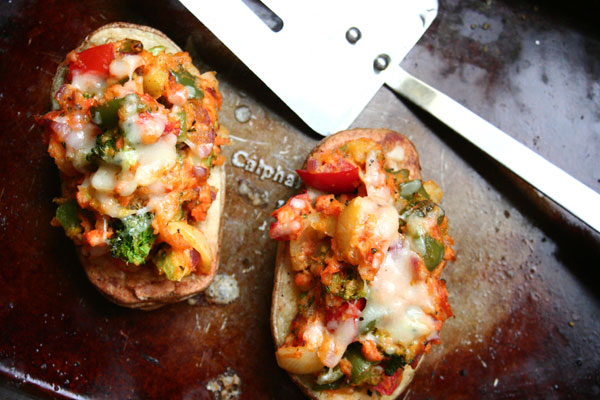 My answer to leftovers is almost always to make soup. But, I’ve branched out for your sake. Do you like soup as much as I do? You don’t have to answer that.

There are enough meals here to feed you for a week.

You might have leftovers of your reinvented meals… it happens.