Brandy and I have known each other for over 10 years! She’s a former roommate/”Faith Ninja”, she was my “best-girl” (matron of honor) and I hers (at the time, I was a maid of honor). I’m so blessed to call her my friend.

Ever since Rach asked me to do this post, my brain has been rolling with ideas as to whatÃ‚ I can share with you, her readers. I received my degree in Culinary Arts 7 yrs ago andÃ‚ since then I have worked in pastry, in the kitchen and also as manager in the front of theÃ‚ house of a two different upscale restaurants here in Anchorage. However for the last twoÃ‚ plus years, I have had the privilege to be a stay at home mom and put my culinary talentsÃ‚ to use in my house, which is one of the biggest reasons I chose this path, because it isÃ‚ something I could/would always be using.

In deciding what to share I landed on what I think to my biggest life changing Ã¢â‚¬Å“ah-haÃ¢â‚¬Ã‚ meal discovery recently. ItÃ¢â‚¬â„¢s nothing really new, its just something that I have been ableÃ‚ to finally work for me. I am also a stay at home mom to two beautiful children, 2 yearsÃ‚ and 5 months, so my days are full and when it comes to making dinner, well, IÃ¢â‚¬â„¢ve learnedÃ‚ why the five oÃ¢â‚¬â„¢clock hour is called the Ã¢â‚¬Å“witching hourÃ¢â‚¬ and many nights it feels like aÃ‚ pure miracle that there is a meal or something to eat, besides corn dogs and hot dogsÃ‚ (which the 2 yr old would love). I have started buying large amounts of meat and ratherÃ‚ than just freezing it raw, IÃ¢â‚¬â„¢ve cooked it and frozen it already cooked. That way I canÃ‚ pull out a bag and throw it into a casserole, or heat the meat for tacos, put it into a soupÃ‚ (ok, thatÃ¢â‚¬â„¢s a nice idea, but we really donÃ¢â‚¬â„¢t do soups in this house, husband doesnÃ¢â‚¬â„¢t love,Ã‚ nor does the 2 year old, so mostly a waste of my time), enchiladas are a favorite, BBQÃ‚ chicken sandwiches, sloppy joes, spaghetti with meat sauce, you get the point, there is aÃ‚ lot you can do with a bag of already cooked meat and you donÃ¢â‚¬â„¢t have to spend the timeÃ‚ thawing the meat, cooking and then starting your dish.

Now, also knowing that I didnÃ¢â‚¬â„¢t have tons of time to spend in the kitchen to cook allÃ‚ my meat, I put my crock pot to work! (ThatÃ¢â‚¬â„¢s my second favorite kitchen discovery asÃ‚ of late, LOVE my crock pot)!!! Oh, and times I can put my frozen meat in to the crockÃ‚ pot and then dinner comes out a few hours later, ahhhhh thatÃ¢â‚¬â„¢s wonderful!! Anyhow, IÃ‚ digressÃ¢â‚¬¦.So, what I did was this:

Bought large quantities of meat at Costco: I bought two whole chickens, a large 6 poundÃ‚ tray of ground beef (you could do the same with turkey meat) and I bought two largeÃ‚ roasts, I think they were just rump roasts, or something like that.

So, night 1 when I got home, I made 1# of the hamburger into chili, also adding 1# ofÃ‚ ground turkey I had on hand and at the same time while I was at my stove cooking chili, IÃ‚ was cooking the ground beef Ã¢â‚¬â€œ getting two things done at once. I seasoned it with salt andÃ‚ pepper, some onions and granulated garlic. I was able to split this up and made 5 Ã¢â‚¬â€œ 2 Ã‚½ cÃ‚ servings and froze them in Ziploc quart bags. 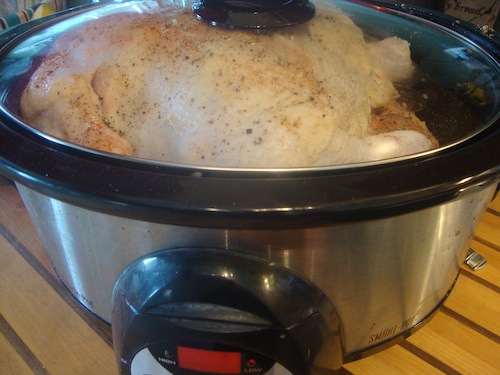 The next two days I put my crock pot to work. One day for chicken and one day forÃ‚ the roast. In the morning I put my two chickens, cleaned out the insides, patted dry theÃ‚ outside and seasoned with salt and pepper and actually put some of my favorite dry BBQÃ‚ rub on them, and under the skin even. These then cooked for about 5 hrs on low (I findÃ‚ my crock pot cooks hot). I knew they were done when I was going to pull them out to drain off the liquid and as I pulled them out, the meat fell off the bones. I then separated the meat from the bones and cut the chicken up and was able to divide it into 6 bags ofÃ‚ a little over 2 cups each. A new tip I read recently and have tried is to roast the chickenÃ‚ breast side down, as then the juices from the thigh meat drains into the breast meat,Ã‚ making it juicier and not drying it out. One time I did this my chickens were really tooÃ‚ big for my crock pot so I had to hack them apart until I could get them to fit. 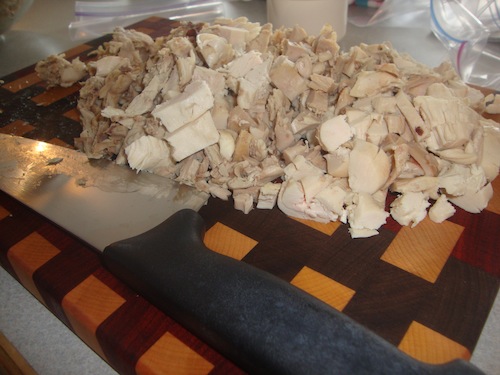 To make the roast I chose to make it into a Ã¢â‚¬Å“Mexican MeatÃ¢â‚¬ Ã¢â‚¬â€œ we make lots ofÃ‚ enchiladas, tacos, burritos, quesadillas, nachos, etc in this house. So I seared the roastsÃ‚ in a pan on the stove, with some olive oil, salt and pepper. This step is helpful, but ifÃ‚ youÃ¢â‚¬â„¢re hurting for time, not the end of the world, but it does help to seal in the juices.Ã‚ Then I placed them in the crock pot and sprinkled with a hefty amount of taco seasoning,Ã‚ you could also throw in some onion and garlic to roast with meat as well, a can of greenÃ‚ chilies would also work well mixed with this meat. I cooked this on low as well forÃ‚ about 5 hours (as I recall). Until it was fork tender, meaning I could pull it apart with myÃ‚ fork. I then used two forks to pull apart the meat, and you could either mix it in with theÃ‚ drippings, or pull it out, your choice, but those drippings, while fatty, will help keep theÃ‚ meat moist. This also made about 5 bags of 2 cup servings. 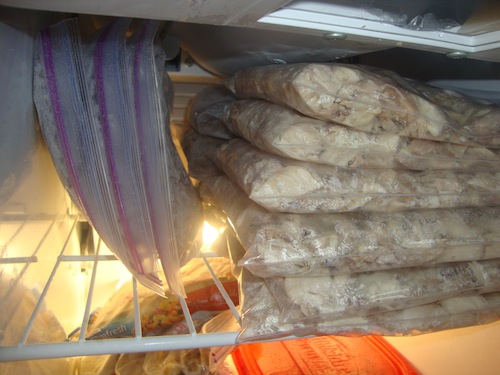 I get so excited about having bags of meat ready to go in my freezer and it makes dinnerÃ‚ time seem so much more realistic. I hope that one of these ideas will inspire you to makeÃ‚ your weeknights easier too!