I had big plans for today. Gilmore Girls Day. I’ve been waiting for this for a year. I’ve felt frustration about season seven of Gilmore Girls since the first time I watched it. I wanted some answers and some closure. I needed an excuse to eat junk and had food planned for each episode.

Episode 1 – coffee in our Luke’s mugs, donuts, and Poptarts 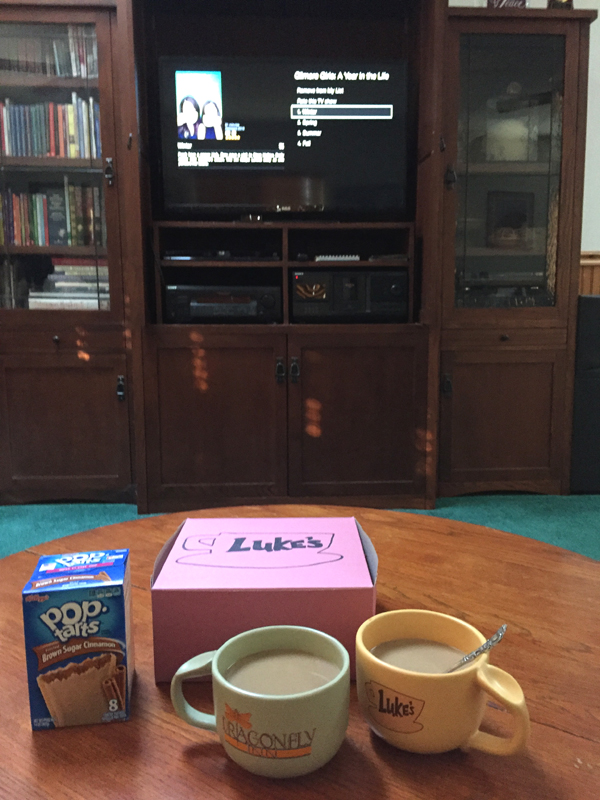 Left off the menu was Chinese food, burgers, deviled eggs, tacos, pickles, Mallomars, blueberry shortcake, and burritos. But, I’ll pencil those in for the next time that I watch the revival… cough… tomorrow… cough. We had plans to start early and watch all the way through. We had the fire going, blankets for coziness, snacks ready and waiting. It was a good plan. But, things don’t always go the way we want them to, do they?

We watched it all. I cried. A lot. We ate some of the snacks we’d bought. I’m glad we hadn’t decided to do both pizza, burgers, and Chinese food like I’d originally hoped. We didn’t even make the chili fries or get to the Poptarts, and the Founders Day Punch became hard cider. We ate so many donuts that I lost count. I wasn’t hungry for the pizza that I ate. But, I ate it anyways, because it’s wasteful to throw out perfectly good pizza. I flip flopped from Team Logan to Team Jess (and back and forth again). I had great expectations for this show. It didn’t really disappoint. The day, as a whole, was acceptable. But, no matter what, the ending of a show this epic will always result in some sort of a letdown.

I know. It’s just a show, right? Big picture, it’s not that important. But the thing is, to me, it kinda is. Tim and I have been watching this show together (what up Gilmore Guys!) for ten years. I remember watching this show with him at each home we’ve lived in (I think we’re at around seven if we count the month we housesat and the three weeks in Paris). Before we moved, after we moved, boxes everywhere. During critical and life changing events. It was a small comfort during those times when I couldn’t stop crying because once again I wasn’t pregnant. It’s been my background while I planned menus and folded laundry. It’s just a show. Life is fine without it. But, life is better with it. It just is.

Today’s episodes hit home a little more than usual. I generally can’t relate to single mom stuff, life as a diner owner, or Rory in college. But, (MINOR SPOILERS AHEAD) Rory is 32 now. She’s struggling with figuring out her life’s direction. Hello! We’re on a four month soul searching road trip. She feels lost and like a failure. Ugh. Did she read my second last post?! (SPOILERS ENDED) AND THESE (whoa! didn’t mean to start that in all caps) characters feel like friends. Am I lame for feeling that way? Don’t answer that. I care about them (don’t judge). I feel with them (Richard dying – he’s dead in real life – their tears probably weren’t faked). I feel like I’ve known them for years.

Judge if you want. I’ll be here drinking boxed wine out of a water bottle, eating cold Poptarts, and searching the land and farm website for the umpteenth time. So I don’t really care. Could Lorelai hire me to be her chef at the Dragonfly Inn? Oh wait, that’s not a real place. Crap.

I miss them already.