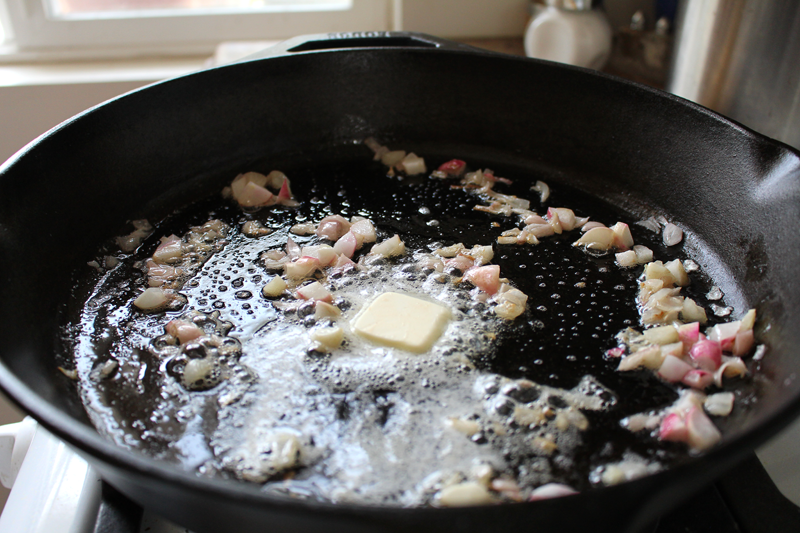 The smell of garlic burning brought her out of her daydream. She swore and clicked off the flame. She dumped the scorched garlic into the compost, wiped out the cast iron skillet and set it back on the stove. She minced a few more cloves, setting aside their papery skins to use in veggie stock. The carrots were in the oven already. They’d soon be browned at the edges and sweetened by honey, with a touch of salt, pepper, and a sprinkle of cayenne. The bread had come out just before the carrots had gone in. When she leaned in close she could hear it crackling as it cooled. She inhaled and closed her eyes.

Freshly baked bread took her back to childhood. Mom pulling out the fresh loaves of her signature bread, ready to be slathered with butter (or margarine, it was the 90’s). It took her to early memories, hazy enough that they could have been a dream. Oma’s hands showing how to shape the Zwiebach buns, her little hands trying to mimic the motion. Praise from Oma, her gentle voice encouraging her young granddaughter as she learned a generations old recipe. Her eyes flitted over to the framed recipe on the wall. Written by Oma’s hand. She would make them again soon aided only by memories this time.

She turned the stove back on and added a bit more oil. She loved the way it rippled when it got hot. She added a big pat of butter and then another and watched as they sizzled and began to brown. She threw in the garlic and the smell wafted up to her nose. She breathed deeply. The garlic just needed thirty seconds. This time it wouldn’t burn. She added some white wine and turned the heat down to low. It would reduce into a simple sauce, perfect to coat the homemade pasta she’d spent the afternoon rolling and cutting. She didn’t mind. That kind of work was good for the soul.

She opened the screen door and the dog shot past her. Hopping and barking at the tree where he’d seen a squirrel earlier. Then running over to her husband at the barbecue. She smiled. She bent over her garden box to see what was growing. The beans had popped up, some squash plants were flowering, and the tomatoes were getting tall. She snipped off some garlic chives and plucked a big handful of basil leaves. The smell was intoxicating. No wonder the bees wouldn’t leave the basil flowers alone. She walked over to the barbecue. Her husband pulled her over and hugged her tight. He smelled like campfire. “Chicken’s almost ready” he said. She smiled and called the dog to come back inside and keep her company.

She washed and dried the herbs, chopping them with her sharpest knife. They’d be passed around the table for people to sprinkle on the pasta as they wished. The salted water was boiling. Huge rolling bubbles, sometimes jumping over the edge of the pot and making the flame sizzle. She added the pasta, stirring so it wouldn’t stick. It would only need a minute. She tasted the browned butter sauce. It had reduced nicely, but still needed to be seasoned. Just salt and pepper this time. She added a bit of the starchy pasta water to the sauce before draining the pasta, then added the pasta to the skillet. She stirred it gently then tasted it. She sighed. It was good. She took the carrots out of the oven. They needed a pinch more salt. The best way to bring out the flavors of a dish.

She pulled the parmesan cheese out of the fridge and scraped it along the grater, transparent curls falling and melting over the hot pasta. The dog ran over, eyes begging for a taste. She laughed and tossed a chunk of the rind that bounced off his nose and fell to the floor. Her smile widened as she shook her head. As she sliced the bread she heard children laughing outside. Not hers. Maybe someday. Her heart ached a little at the thought. For now, this was enough. She walked to the stove and took another taste of pasta. The cool breeze through the open window mingled with the smell of the sauce. They were like refreshment to her soul. She heard voices outside. These she recognized. Their family away from family. The doorbell rang. She took a breath and walked over to open the door.